Home
Science & Tech
SCIENCE & TECH: Why Is This Mammoth Tusk In Deep Water Off the Californian Coast?

SCIENCE & TECH: Why Is This Mammoth Tusk In Deep Water Off the Californian Coast?


A 100,000-year-old mammoth tusk has been discovered by a robot more than 10,000 feet below sea level. But rather than in Arctic wastes, where they’re usually found, this one was uncovered in the Pacific Ocean off the California coast. So what on Earth was it doing there?

In 2019, while exploring for new deep-sea species off the California coastline, a team of scientists from the Monterey Bay Aquarium Research Institute (MBARI) discovered a huge mammoth with a remotely operated vehicle (R.O.V). According to New York Times , the discovery represents “an ‘ Indiana Jones ’ mixed with ‘Jurassic Park’ moment.”

Evidence suggests the young female mammoth inhabited the Central Coast of California. When the creature died, its gargantuan body somehow ended up in the Pacific Ocean and eventually came to rest on a seamount, 10,000 feet (3,048 m) under sea level and 150 miles (241 km) from shore.

Mammoths are the hairy ancient relatives of modern elephants. Having emerged around five million years ago some survived on Russia’s Wrangel Island in the Arctic Ocean until as recently as roughly 3,700 to 4,000 years ago. Yup, that means mammoths were still around during the construction of Egypt’s Great Pyramid . Indeed, the first mammoths came out of Africa and spread northwards, eventually colonizing most of the Northern Hemisphere.

Randy Prickett is a senior R.O.V. pilot at the MBARI, and he told Santa Cruz News Network that when the R.O.V. floated over the tusk, not everyone was convinced it was actually a mammoth tusk. However, it is reported that Prickett called out: “if we don’t grab this right now you’ll regret it.” When the robot arm reached out and grabbed the ancient mammoth tusk, the foot-long (about 30 cm) tip broke away and left the bulk behind. 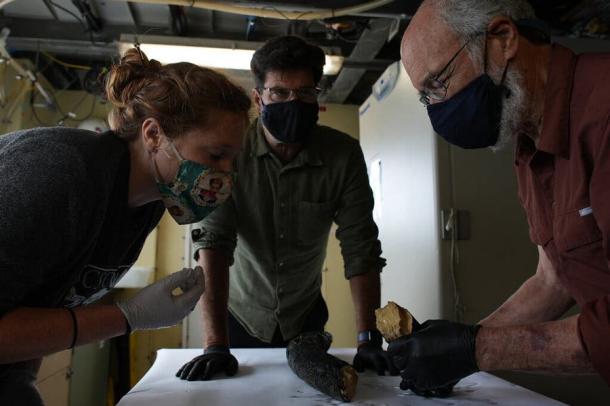 Prickett told The New York Times that tusks are generally found “deep underground or encased in permafrost near the Arctic Circle,” and that never before have the remains of an ancient mammoth been found in such deep water. The 2019 research project, that subsequently studied the tusk, was led by MBARI marine biologist Steven H.D. Haddock and a team of research scientists from the institute, the University of California, Santa Cruz and the University of Michigan.

The sheer thickness of the crust that formed around the tusk told the scientists that it was very old. After DNA samples were studied, Dr. Blackburn, a geochronologist in Santa Cruz estimated that it had been dead for more than 100,000 years. It was discovered that the creature had died somewhere during the Lower Paleolithic, between 2.7 million through 200,000 years ago. This means that the mammoth tusk is exceptionally rare, with most discovered specimens dating to within the last 60,000 years. 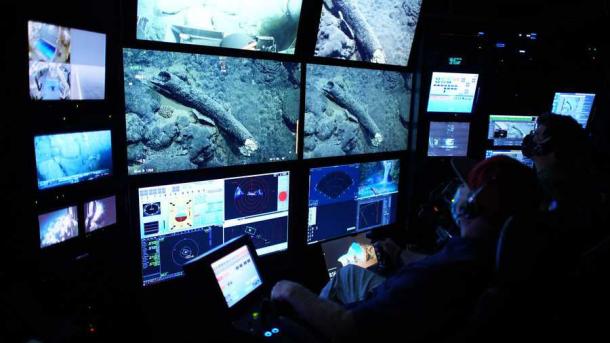 So seldom are such old evidence of mammoths ever found that Dr. Haddock thinks this specimen “may help answer long-held questions about the evolution of mammoths in North America .” Pete Heintzman, an associate professor at the Arctic University Museum of Norway said that if this tusk is as old as the team of scientists suspect it is, then it might help “clarify the timing of this hybridization event.”

Why then, are ancient mammoth tusks not being hauled ashore all the time? Dr. Haddock said the find site had recently been disturbed by oil or mineral prospectors. Otherwise it would never have been found. As scientific advances are made at an ever-increasing rate, sub-sea discoveries are also on the increase.

Sub-bottom profiling with sonars reveals structures buried deep beneath sediment. Advancements in side-scan, or multi-beam sonar, means underwater imaging is at ultra-high resolution, and magnetometry is being used to locate iron nailed shipwrecks, anchors and cannons all over the world.

Considering this armament of technology, perhaps it’s time for archaeologists to address where they deploy it. For surely the mammoth tusk discovery means that marine archaeologists, all over the world, now need to begin scanning the routes of mineral and oil craft, for it is they who churn the seabed revealing such stunning ancient treasures.

(Visited 5 times, 1 visits today)
Join @usnewscom on Telegram
KNOWLEDGE is POWER / REAL NEWS is KEY
Woke & Liberal News is Fake News
You will find it on:
CNN - CBS - MSNBC - ABC - The New York Times - The Washington Post - Facebook - Twitter and more
They ALL SUCKS and simply DO NOT tell you the truth PERIOD