Two small chunks of metal, buried separately but near each other, have turned out to be parts of the same ornate Viking sword. Separated 1,200 years ago, the first part of the sword ‘Queen of Gausel’ was found on a farm in Stavanger, Norway, last year by an amateur treasure hunter. The second half of it was unearthed by his friend and fellow amateur metal detectorist last week, and it turns out that the two chunks joined perfectly, forming part of a massive Viking Age sword, called a ‘D-sword’, reports Live Science .

The Petersen D-Sword and its Possible Frankish Origins

In a press release , Ann Zanette Glørstad, an archaeologist at the University of Oslo in Norway said:

“The sword is probably what we call a D-sword… one of the richest ornamented, and heaviest sword types from the Viking Age. It is still difficult to see all the details but the decor includes elements of the typical animal style from the Late Iron Age, as well as geometric figures of silver with so-called niello technique – that is, a metal mixture was added as black stripes in the silver. The lower helmet is decorated in the same way as the grip, and at each end the helmet is shaped like an animal head.”

Even though the blade is missing, the sword had intricate carvings and beautiful decoration – gold and silver details were included, with each end of the cross-guard shaped like an unidentified animal. It also shows the substantial labor and effort that went into making this sword.

The animals along with the geometric silver figures were made with the so-called niello technique in which metal mixtures were added in the form of black stripes in the silver. This suggests the sword originated in the Frankish Empire or England.

According to Glørstad, there are copies of the Petersen Type D-sword all over Eastern Europe (Hungary, Romania, etc.) and Western Europe (France, Germany, Britain, Ireland), and it is widely recognized as one of the most heavily ornamented swords from the Viking Age. Norway itself has 20 similar artifacts, though most of these are imported. Yet, she also argues that copies of this type of sword could have been made by skilled swordsmen in Norway. “The closest parallel we know is a sword from the island of Eigg in Scotland , which was found in a tomb from the ninth century,” she adds. 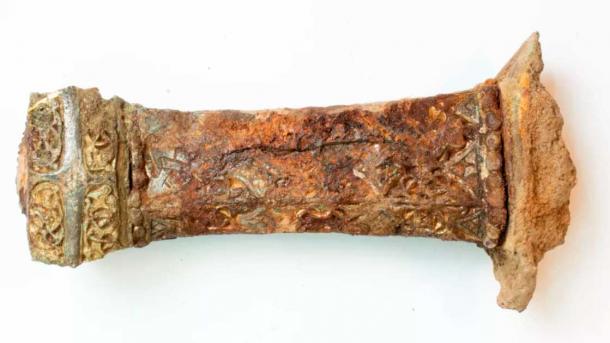 The richly decorated hilt of the sword from the Viking era. (Lise Chantrier Aasen/ Stavanger Museum )

The work on the sword does not suggest that it was possessed by anyone from the lower classes, as it would have been unlikely that they were able to afford something like it. Therefore, someone with means who wanted to demonstrate their exalted social status probably owned this sword. It was not uncommon for sword owners from this era to inscribe their name on the blade, but the missing blade compounds the problem here.

Generally, in Viking times, swords were costly to make and sign of a high status. The more decorative and fancy the inlay work was, the more it indicated that the person was well-off. It was also a sign of pride and power that a male Viking warrior could project. Poor farmers often only owned an axe, but sometimes they could gain access to a sword after a raid. Local craftsmen would be renowned for particular styles of sword making, and certain swords would be given fanciful names as well.

SCIENCE & TECH: Johan de Witt: The Failed Politician who was Cannibalized by his Opponents

But there are some clues about the Viking sword  – it was discovered in the grave of a rich Viking woman, the ‘Gausel Queen’, reports IFL Science . She had been found with treasures from as far away as Ireland! Håkon Reiersen, acting head of the Norwegian Archaeological Museum’s collection department, and who preserved the first piece of the sword when it was located last year, adds that that, “We knew this area was of special importance, but that we should find something like this was very unexpected!”

The sword’s preservation is the priority right now, and for this very purpose it will be kept at the museum. This will also interest historians and archaeologists from other parts of Europe, who can help shed light on the origins and identity of the owner of this Viking sword. Till then, all sword enthusiasts have a chance to keep up with the sword’s preservation via Instagram and the official page of the museum.

(Visited 17 times, 1 visits today)
Join us on Telegram
KNOWLEDGE is POWER / REAL NEWS is KEY
Woke & Liberal News is Fake News
You will find it on:
CNN - CBS - MSNBC - ABC - The New York Times - The Washington Post - Facebook - Twitter and more
They ALL SUCKS and simply DO NOT tell you the truth PERIOD