SCIENCE & TECH: Tulipmania: When Tulips Cost More than a House!

Used frequently as a warning, almost, to deter people from shifting towards cryptocurrencies, particularly the Bitcoin boom, “tulipmania” is often recognized as the first recorded speculative bubble in history. Modern finance and mercantilism, just emerging around the turn of the 16th and 17th centuries, during the Dutch Golden Age, experienced several speculative bubbles. Some were connected to the investor-backed voyages of various European trading companies (backed by kingdoms most of the time). The tulipmania bubble only lasted from 1634 to 1637, and in that time the price of tulips increased by over 200 times, with a single tulip bulb selling for ten times a worker’s annual wage.

The Tulipmania Bubble: A Rapid Rise, A Rapid Fall

The profit margins and absurdity of tulipmania was short-lived, with the bubble bursting just a month after the peak. Almost overnight, tulip bulb prices dropped to nearly nothing. Sound familiar? In the post-war era we have experienced more than a few speculative bubbles: the dotcom bubble blew up in 2000, the housing bubble burst in 2006-2007.

Simply put, a speculative economic bubble is a particular kind of financial situation when prices strongly exceed the intrinsic value of an asset. In the free market era, the adoption of stabilizing practices like a maximum retail price, for example, are followed by governments to ensure that such a situation does not occur. However, bubbles are only identified in retrospect, with those pointing out the unjustified price rises of an asset or announcing an asset bubble viewed as weirdos.

Institutional bonds, for example, are used by governments to protect market investors from sudden price crashes. The most historically relevant instance of this was the Great Depression of 1929, which resulted in a massive drop in Wall Street stock prices. The stock market crashed almost overnight as investors panicked and sold an enormous number of shares on the New York Stock Exchange in a single day, in what was called “Black Thursday.” Clearly capital and speculative bubbles have a long and storied history.

A tulip in the tulipmania of the 17th century known as “the Viceroy” (viseroij), displayed in the 1637 Dutch catalogue Verzameling van een Meenigte Tulipaanen. Its bulb was offered for sale for between 3,000 and 4,200 guilders (florins) depending on its weight. A skilled craftsman at the time earned about 300 guilders a year! (P. Cos / Public domain )

The tulips introduced into Europe were developed from tulips from Asia Minor that were brought to Vienna from Constantinople (modern-day Istanbul) in the 1500s. From the beginning, tulips in Europe were exotic new flowers for the elites and their lavishly flowing homes and gardens.

However, worldwide, tulips are strongly associated with the Netherlands, where tulip cultivation has remained an important industry since the 16th century. Today, Dutch growers produce almost 2,000 varieties of tulips, far more than any other country in the world!

Less than 50 years after arriving in Western Europe, between 1634 and 1637, particularly in Holland and England, tulip popularity turned into a flower craze. And soon enough individual bulbs began selling for absurd prices, eventually wreaking devastation and havoc on countless unlucky or unwise buyers across Holland.

The Library of Economics and Liberty writes that, “The rage among the Dutch to possess [tulip bulbs] was so great that the ordinary industry of the country was neglected, and the population, even to its lowest dregs, embarked in the tulip trade… it was deemed a proof of bad taste in any man of fortune to be without a collection of [tulips].” 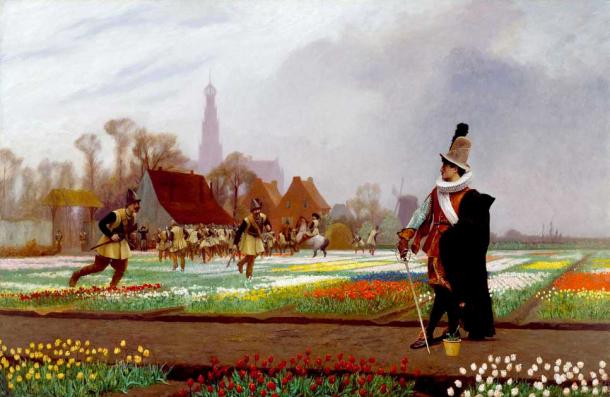 The Tulip Folly, by Jean-Léon Gérôme, 1882. A nobleman guards an exceptional bloom as soldiers trample flowerbeds in a vain attempt to stabilize the tulipmania market by limiting the supply. (Jean-Léon Gérôme / Public domain )

In the early 1600s Holland became one world’s major maritime powers , accounting for roughly half of European trade. They traded with both the New World and Africa. The Dutch monopoly on Asian trade was especially lucrative in the trading of spices. As a result, the Dutch had one of the highest living standards in the world during their golden age. In fact, the time span from roughly 1588-1672 is referred to as the “Dutch Golden Age,” with 1588 recognized as the birth of the republic.

Skilled workers flocked to Holland for the creation of a new republic, and around the same time the Netherlands innovated totally new forms of finance. In fact, the Dutch East India Company founded in 1602, was the first ever multinational corporation, financed by shares that traded on the world’s first-ever modern stock exchange.

To provide stability to Holland’s growing transnational operations, the Bank of Amsterdam was established in 1609. It was the world’s first central bank!

Finally, geography favored the Dutch. Holland was strategically located between the Bay of Biscay and the Baltic. The Dutch provided profitable intermediation, carrying salt, wine, cloth, silver, spices, and other colonial products, between the terminal points of Seville, Lisbon, and the Baltic ports. Grains, fish, and naval stores were shipped westwards from the other end of the Baltic to the big ports of Holland and elsewhere.

Tulipmania: A Moral Epidemic That Hit Nearly Everyone

Political commentators and philosophers wrote about the tulipmania “moral epidemic” as it happened and long afterward. Parallels were drawn between “aberrant crowd behavior in the world of investing bearing resemblance to aberrant crowd behavior in the wider world,” in the words of Scottish journalist Charles Mackay. Mackay wrote a fascinating and popular treatise on crowd psychology in his “ Memoirs of Extraordinary Popular Delusions and the Madness of Crowds,” published in 1841.

This was best exemplified by the behavior of people in response to this artificial price boom. The lunacy that people exhibited during tulipmania was reported in a few sources from the time. One account talked of a sailor who mistakenly ate some valuable bulbs. Another pointed out how an English traveler peeled off every layer of the bulb as a form of experimentation. Of course, there were many reports of people bartering necessities and luxury items in exchange for tulip bulbs.

In another treatise Mackay explains the primary and last damage caused by the tulipmania bubble. Foreign funds in huge quantities entered the country, and suddenly people from all levels of the social order began to liquidate their assets to participate in the tulip bulb buying and selling frenzy. Long term economic distress for individual players was devasting as the frenzy ended overnight. Suddenly there were no buyers and countless prospective sellers lost nearly 90% of their “investments” or trades. 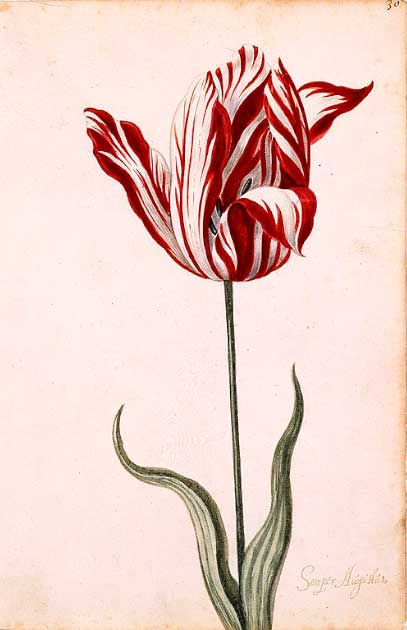 This anonymous 17th-century watercolor depicts a Semper Augustus, famous for being the most expensive tulip sold during tulipmania. ( Public domain )

Overnight, tulips that cost the equivalent of an Amsterdam luxury house had no buyers! But during the three-year boom stockjobbers became tulipjobbers, making pots of money overnight as they coasted on a wave of well-designed price fluctuations. They followed the famous advice for buying and selling anything in financial markets: buy low and sell high or buy on the dip and sell at the peak. And when the people of Holland saw the money being made in the early days of the three-year boom they couldn’t help but buy in and follow the mania.

An average tulip bulb during the mania was often traded more than ten time in a single day during tulipmania. During the height of the frenzy, a story emerged of seven children who auctioned off their 70-bulb inheritance from their deceased father! One of these bulbs was extremely rare and was soon sold for 5,200 guilders (a skilled tradesman made 150 guilders a year).

Tulipmania Ends In Fear Panic: And Panic Is Dangerous!

It would be the most miniscule of incidents that caused the tulipmania crash to begin. In Haarlem, a routine bulb auction turned sour as an investor did not show up. Widespread panic ensued in the market, and investors began panic selling, and within weeks, as the demand evaporated, tulips were valued at just 1% of their former value!

But like the modern dotcom and housing bubbles, the end of tulipmania was not the end of the Dutch Golden Age. Not at all! The national fallout was not especially destabilizing. In many instances, those with pending dues took loans and paid off their debt or were punished with small penalties for not honoring tulip contracts.

As if it never happened, life moved on and continued like it had. The true Dutch downfall would come with repeated skirmishes and war with other Western European powers, culminating in the Rampjaar (or Disaster Year) of 1672, 35 years after tulipmania.

SCIENCE & TECH: Sigurd the Mighty Was Killed by a Severed Head

Top image: The 17th-century tulipmania madness was not unlike the history of Bitcoin so far because in both cases a speculative bubble was created. Without spilling the beans, tulipmania ended suddenly and badly and put a tarnish on the Dutch Golden Age! Source: momosama / Adobe Stock

Adam. 2012. When a tulip cost more than a house. Available at: http://www.todayifoundout.com/index.php/2012/12/when-certain-tulips-cost-more-than-a-house/.

Goldgar, A. 2018. Tulip mania: the classic story of a Dutch financial bubble is mostly wrong . Available at: https://theconversation.com/tulip-mania-the-classic-story-of-a-dutch-financial-bubble-is-mostly-wrong-91413.

(Visited 8 times, 1 visits today)
Join us on Telegram
KNOWLEDGE is POWER / REAL NEWS is KEY
Woke & Liberal News is Fake News
You will find it on:
CNN - CBS - MSNBC - ABC - The New York Times - The Washington Post - Facebook - Twitter and more
They ALL SUCKS and simply DO NOT tell you the truth PERIOD