A pre-development dig by Cotswold Archeology at Herne Bay in Kent, England, has uncovered evidence of settlement from the Bronze Age to the Roman period and again in the medieval period. One of the most striking finds from the site is that of a rare a bone flute.

The trenching work that began in 2021 unearthed features suggesting occupation from the Middle-Late Bronze Age onwards till the Roman period in the western part of the site. Ditches and pits dating to the medieval period were also found in the eastern part, as well as evidence of some early medieval activity, according to a report put out by Cotswold Archaeology .

This ties in well with earlier work in the area that uncovered remains from a time spectrum ranging mostly from the late prehistoric period—Bronze and Iron Ages—to the Roman period. The team also examined indications of possible Paleolithic activity found during previous investigations. So far, however, the team hasn’t found any evidence, in the form of Paleolithic flint artifacts, to support this possibility, but it doesn’t rule it out as more excavations are carried out.

The team was excavating a 61-hectare (150 acres) site south of Hillborough in Kent where fresh urban development is planned, reported Cotswold Archaeology . Spot dating of pottery found there indicated activity from the Mid-Late Bronze Age to the Roman period, suggesting settled agriculture with nearby habitation.

Archaeologists have unearthed remains of what appears to be a rectangular structure. ( Cotswold Archaeology )

Another section of the archaeological site again revealed late prehistoric features, including the postholes of some kind of rectangular feature. They also uncovered some pits and postholes from the Anglo-Saxon and early medieval period that don’t for now add up to any discernible structure. Two ditches that formed two sides of a large rectilinear enclosure have not been dated so far.

A third area lying to the west of existing farmland is believed to have possible medieval origins. Small rectangular enclosures often containing the remains of a sunken featured building dating to the late medieval period are quite common in northern Kent. These sunken buildings were used for baking bread or brewing. One possible such structure has been found by the Cotswold Archaeology team at the site. 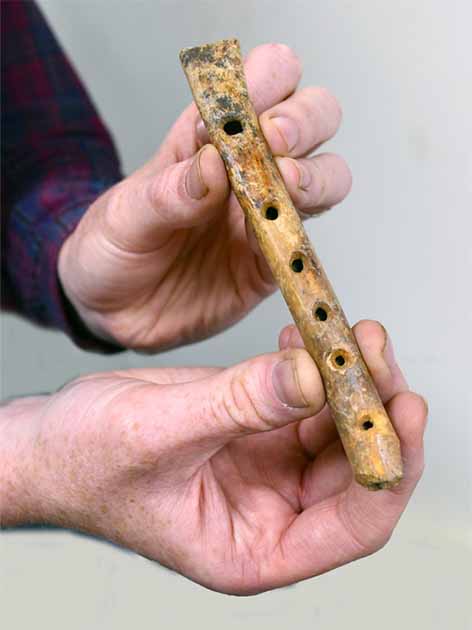 A Rare and Musical Find: Unearthing a Bone Flute in Northern Kent

While all this adds up to a remarkable archaeological treasure trove, it is from a medieval pit in this ditched enclosure that scientists have made their most exciting discovery – a rare bone flute in a well preserved state. The bone flute was found along with pottery dating from the 12th to 15th century, which may help to tentatively date it.

The bone flute is a remarkable artifact crafted from a sheep or goat tibia, with five finger holes along its top side and a thumb hole on the underside. Archaeologists are carrying out a detailed study of the artifact but preliminary examination suggests it is a “fipple flute,” a class of musical instrument related to the modern-day recorder. Originally, the bone flute likely had some kind of mouthpiece, but other than this missing part it is quite intact.

Such bone flute finds are very rare, though a very similar piece was found from Keynsham Abbey, Somerset, in 1964 which was associated with a mid-14th century coin. Other bone flute examples from England include those found in Winchester, Hampshire; Flaxengate, Lincoln; Coppergate, York; in addition to a pair of reed pipes from Ipswich in Suffolk.

Bone Flutes in the Archaeological Record

While bone flutes and pipes are rare artifacts, they are still the most common type of musical instrument found in archaeology. A thesis on medieval English bone flutes by Helen Leaf makes the interesting observation that flutes form little or no part of the written or pictorial record in history.

Nevertheless, bone flutes are much more substantial in terms of archaeological record than, say, the lyre which is much better represented in iconography. In Britain alone, the remains of 118 flutes in different states of preservation have been found, while there have been many more flute discoveries made across Europe.

The Kent find has added an almost complete specimen to the archaeological record of bone flutes found in England. As Cotswold Archaeology conducts its post-excavation assessment, more information will be available on the provenance and associations of the flute.