A new study of the effigy on the tomb of the Black Prince in Canterbury cathedral has revealed an extraordinary level of detail. Nobody expected to discover such a sophistication in construction, pointing to an unexpected level of medieval crafting knowledge.

Six centuries after the death of the Black Prince a team of scientists from The Courtauld Institute of Art have undertaken an analysis of his tomb effigy in Canterbury cathedral. Tests conducted with a stethoscope have revealed a “masterpiece of English medieval metalwork.”

The knight’s battle armor has been executed to a high degree of accuracy. It is an almost exact match for the controversial prince’s real world battle armor, that is still displayed by his tomb.

A Short and Bloody Life

Edward of Woodstock, known as the “Black Prince” (15 June 1330 – 8 June 1376), was the eldest son of King Edward III of England. Had he not died before both his father and his son, Richard II, Edward would have been king.

In his short life he became a legendary military commander. However, we must consider that this perception is very English-centric, and for the French enemy he is remembered as a marauding slaughterer.

A report about the discovery in The Burlington Magazine says that during the Hundred Years War between England and France in 1370 AD, “3,000 men, women and children were slaughtered by Edward in a violent passion.”

While the number of those slaughtered is debated among scholars, this is why Edward was named the “Black Prince”. Another article on History Extra says the prince “has been both eulogized as the epitome of medieval chivalry and demonized as the instigator of brutal slaughter.”

Dead Before His Time

Despite his warlike reputation Edward did not fall on the battlefield. His was a more ignoble end, dying of dysentery at Westminster on 8 June 1376. Caused by the shigella bacteria (shigellosis) dysentery is generally contracted through contaminated food or water. The prince would have died in a bed of bloody diarrhea, suffering shooting abdominal pain, long lasting cramps, high-fever and malaise.

On his death bed Edward detailed his wishes for his tomb and effigy. An article on Historic-UK says Edward was “very particular as to what was to happen after his death.”

An effigy is a life-size sculptural representation of the deceased, and this new study reveals for the first time how closely his instructions were adhered to. If fact, the effigy is so accurate that the team is convinced an actual metal plate armorer had been employed to make it.

Dr Barker And The Black Prince

Professor Jessica Barker, senior lecturer in Medieval Art at The Courtauld Institute of Art, led a team of scientists working with staff at Canterbury cathedral. The researchers scanned the exterior of the effigy with a hand held portable X-ray fluorescence spectrometer.

They identified a small opening in the effigy and slid in an endoscope to study the hollow interior. Worming the tube of light with a camera on the end through the tiny opening, it was revealed that, while not visible from the outside, “it was cast in sections and held together by an intricate system of bolts and pins.” 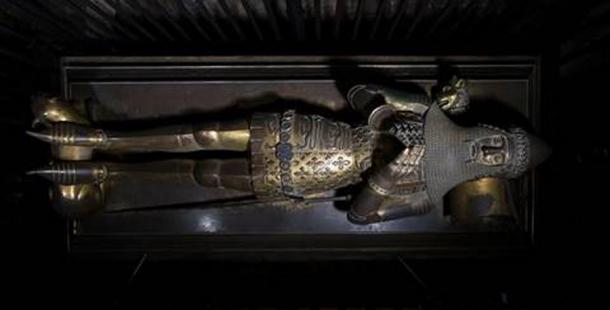 Based on this, Dr Barker described the effigy as a completely “unique and innovative figure.” Furthermore, she said it demonstrated “the technological sophistication of the medieval period.” An article in The Art Newspaper quotes the lead archaeologist saying she finds something “deeply affecting” about the depiction of the Black Knight’s armor on the tomb.

This “isn’t just any armor, it is his armor, the same armor that hangs empty above the tomb, replicated with complete fidelity even down to tiny details like the position of rivets,” she added.

The new study has also dated the construction of the tomb, and suggests the effigy was created about a decade after Edward’s death. It is believed his son Richard commissioned two effigies: one for is father in Canterbury and the other for his grandfather, Edward III, in Westminster Abbey .

In conclusion, the researchers said the Black Prince’s effigy ranks as “number one of the UK’s most precious surviving sculptures.”

(Visited 5 times, 1 visits today)
Join @usnewscom on Telegram
KNOWLEDGE is POWER / REAL NEWS is KEY
Woke & Liberal News is Fake News
You will find it on:
CNN - CBS - MSNBC - ABC - The New York Times - The Washington Post - Facebook - Twitter and more
They ALL SUCKS and simply DO NOT tell you the truth PERIOD