Among their many talents, the ancient Romans were pioneers in the art of concrete making and construction. The quality of Roman concrete used to build their aqueducts, tombs, bath houses, piers, amphitheaters, and homes was so good that many of these structures still stand today, defying the expected ravages of time.

Scientists seeking to unlock the secrets of the Roman concrete masters have now experienced a breakthrough , as a result of an analysis completed on a large cylindrical tomb that was built to house the remains of a first-century BC noblewoman named Caecilia Metella.

Working with funding provided by the United States Department of Energy, University of Utah geophysicist Marie Jackson teamed up with Linda Seymour and Admir Masic from the Massachusetts Institute of Technology and Nobumichi Tamura from the Lawrence Berkeley National Laboratory to carry out an in-depth study of the materials and methods used to construct Caecilia Metella’s tomb . They were interested in learning more about the rock used to make the Roman concrete, and especially about the mortar that was used to bind the concrete blocks together.

What they’ve discovered could be highly relevant to the building industry today, as construction experts seek ways to build structures that can last as long as those that were erected by the Romans more than 2,000 years ago.

The interior of Caecilia Metella’s tomb on the Appian Way has stood the test of time because of the secrets of Roman concrete. (Lalupa / CC BY-SA 3.0 )

The tomb of Caecilia Metella can be found on the Via Appia Antica, or the Appian Way , an ancient military supply road that connected Rome with Brindisi in southeast Italy. Construction began on this road in 312 BC, and it remained a critically important thoroughfare for many centuries.

Caecilia Metella’s tomb is massive by any measure. The circular mausoleum is 70 feet (21 meters) tall, 100 feet (29 meters) in-diameter. It was built from concrete blocks stacked on top of a square supporting base. It is decorated around the top with a marble frieze , and the frieze features images of garlands and ox heads. At the entrance of this spectacular tomb, there is an inscription that bears the name of Caecilia Metella, identifying her as the structure’s occupant.

The tomb was constructed in 30 BC, during the reign of the first Roman Emperor Augustus. Caecilia Metella was afforded such an honor because of her connections to two important people.

She was the daughter of the Roman consul Quintus Metellus , who had a distinguished career as a military leader. She was also the wife of Marcus Crassus, whose famous father Marcus Licinius Crassus was a member of the Roman Republic’s First Triumvirate , along with Pompey the Great and Julius Caesar. Given the size and grandeur of Caecilia’s tomb, it may have been her husband who funded its construction (the Crassus family was fabulously wealthy).

Even in comparison to other surviving Roman tombs, the burial place of Caecilia Metella is in fantastic condition.

“The construction of this very innovative and robust monument and landmark on the Via Appia Antica indicates that she was held in high respect, and the concrete fabric 2,050 years later reflects a strong and resilient presence,” study leader Marie Jackson said, in a University of Utah press release .

But why did this fabulous tomb last so long, and remain in such good shape? As it turns out, the secret can be found in the glue that was used to put it together. 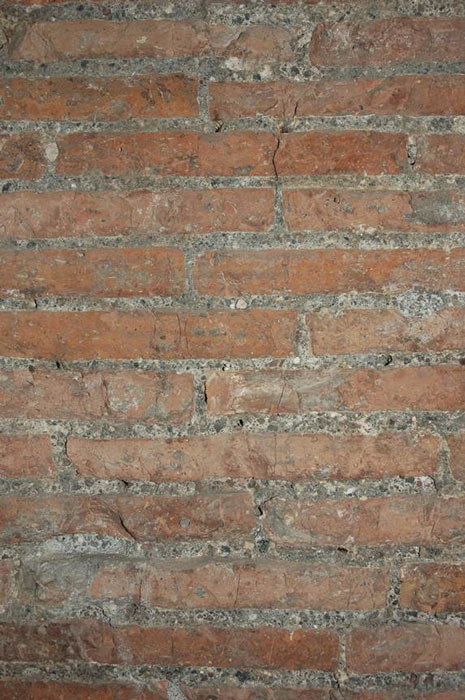 Bricks and Roman concrete mortar in the Munoz corridor of the tomb of Caecilia Metella. (Marie Jackson / The University of Utah )

Discovering the Truth about the Best Mortar Ever Made

As Marie Jackson and the other scientists explained in an article about their research published in the Journal of the American Ceramic Society , they used the most powerful and up-to-date scientific tools available to examine the chemical and physical microstructure of the Roman concrete and mortar used in Caecilia Metella’s tomb.

The ancient Romans didn´t use poured cement to make concrete. Instead, they used volcanic rock aggregates to build coarse brick walls. While volcanic rock will break down and crumble eventually, in just two or three thousand years it won´t decay much in comparison to other types of building materials.

The scientists discovered this volcanic aggregate was bound together with Roman concrete mortar made from hydrated lime and volcanic tephra (small, porous pieces of volcanic glass and crystal created during eruptions). The latter was available in abundance near Rome, as a result of ancient volcanic eruptions in the region.

The ancient Romans understood that this was an extremely strong and durable formula. The Roman architect Vitruvius, writing at that time, explained that his people’s concrete technology allowed for the erection of structures that “over a long passage of time do not fall into ruins.”

Previously, Jackson and her colleagues had taken mortar samples from concrete ruins associated with Trajan’s Market, a commercially-oriented complex located near the Roman Colosseum that was built in the early second century AD. Like the mortar used in Caecilia Metella’s tomb, this mortar was made from volcanic tephra taken from the nearby Pozzolane Rosse lava flow, which was a remnant of eruptions from the Alban Hills volcano located 12 miles (20 kilometers) southeast of Rome. 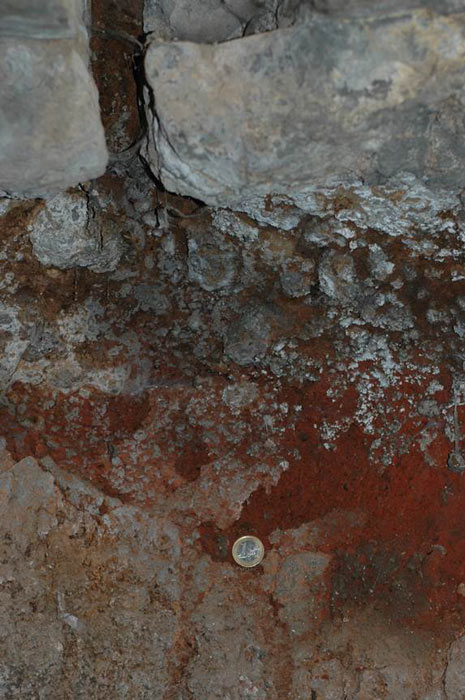 Lava overlying volcanic tephra in the substructure of the Caecilia Metella tomb. (Marie Jackson / The University of Utah )

In their Trajan’s Market studies, the scientists identified the glue used in the mortar as a mixture of calcium, aluminum, and silicate, which created a strong binding gel. This was the same type of gel used to make the mortar at Caecilia Metella’s tomb, their later studies found, but they detected one notable difference. The tomb mortar contained significant quantities of the mineral leucite, which was rich in potassium.

As it turned out, it was this extra mineral, leucite, which ensured the durability of the tomb.

When leucite is exposed to rainfall or groundwater, it dissolves and releases all of its potassium. Over the centuries, all of the leucite in the tomb walls was dissolved, meaning significant quantities of potassium had been added to the rest of the mortar mixture. The scientists discovered that this potassium had interacted with the calcium, aluminum, and silicate compound and changed its chemical structure noticeably in the process.

SCIENCE & TECH: The Mysterious and Tragic Life of Kaspar Hauser

Normally, it would be assumed that such a reaction would have damaged the mortar and made it less able to bind the volcanic aggregate in Roman concrete together. But in this case, just the opposite happened. The chemical reconfiguration of the mortar increased its binding capacity, which meant that centuries of exposure to water infiltration had actually made the concrete blocks of Caecilia Metella’s tomb more resistant to cracking, crumbling, sliding, or dislodging.

In the words of Marie Jackson, the chemically remodeled chemical glue compounds “evidently create robust components of cohesion in the concrete.”

The Romans would have had no way of knowing what would happen to their buildings thousands of years in the future. But they had inadvertently stumbled on a formula for mortar that would stand the test of time better than any similar substance used anywhere else in the world. 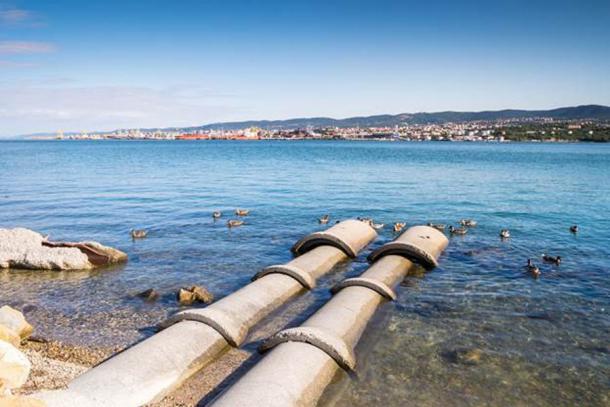 Catching Up with the Romans, 2,000 Years Later

The U.S. Department of Energy funded this research with modern problems in mind. Department scientists are hoping to create modern versions of ancient Roman concrete and mortar that will be less energy intensive to produce than traditional cement and that last longer when installed in marine (underwater) environments.

“Focusing on designing modern concretes with constantly reinforcing interfacial zones might provide us with yet another strategy to improve the durability of modern construction materials,” MIT scientist Admir Masic explained. “Doing this through the integration of time-proven ‘Roman wisdom’ provides a sustainable strategy that could improve the longevity of our modern solutions by orders of magnitude.”

Jackson, Masic, and the other members of the Caecilia Metella tomb research team will be involved in the ongoing efforts to create this new and better concrete. If they are successful, their efforts will represent yet another instance where the innovations of ancient Rome were shown to be relevant to the culture of today.

Top image: Scientists seeking to unlock the secrets of Roman concrete have carried out an in-depth study of the materials used to construct Caecilia Metella’s tomb, near Rome.  Source: Livioandronico2013 / CC BY-SA 4.0