A miniature Bible surfaced in the vast Leeds library during lockdown. The tiny holy book includes both old and new testaments and was printed on 876 stamp-sized pages. However, nobody knows where this miniature Bible treasure came from.

Measuring only 1.9 inches (50 millimeters) by 1.3 inches (35 millimeters), about the size of a US quarter or a UK two pound coin, the bible was printed in 1911. Featuring 876 gossamer-thin Indian paper pages with both testaments, the bible was rediscovered in 2021 during Covid-19 lockdowns at the Leeds Central Library, located in the largest city in the county of West Yorkshire, England. According to a report in the Daily Mail , Rhian Isaac, special collections senior librarian at the Leeds Central Library, said nobody is sure where the book came from: “it’s a bit of a mystery, really.”

The amazing 1911 Leeds miniature Bible, discovered in the Leeds Central Library in 2021, is still waiting for someone to say where it came from! Source: LeedsLive

Some of the First Mini Books Were Miniature Bibles

The current Guinness World Record holder for the world’s smallest reproduction of a printed book is Teeny Ted from Turnip Town , measuring 70 by 100 micrometers (0.00276-0.00393 inches). Canadian scientist Simon Frazer etched this children’s story onto pure crystalline silicon with an ion beam. This book is so small it can fit onto a human hair, and it falls into the “ultra micro miniature” book category.

However, back in 1911 there were no such technologies, and the Leeds miniature Bible was crafted by hand, making it infinitely more valuable than the robot created micro-books of the modern world. 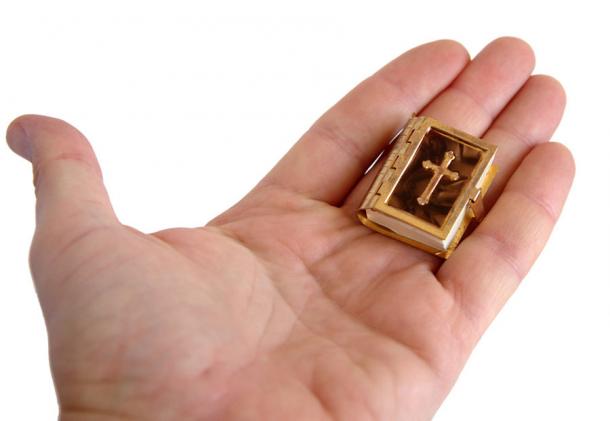 The History of Tiny Books

An article on Biblio.com explains that around 200 miniature books have survived from the 16th century including “46 bibles and 2 editions each of Ovid and Dante.” In 1819, William Pickering (1796–1854) began mass producing miniature books and soon after competing publishers began publishing thousands of miniatures. According to Doris Varner Welsh’s 1987 book The History of Miniature Books , in the last half of the 19th century Empress Eugenie, wife of Napoleon III , owned a collection of miniature books that is reported to have contained “between 1800 and 2000 volumes.”

The tiny Bible discovered in Leeds was one of 3,000 curious artifacts rediscovered during the Covid lockdowns, most of which Librarian Isaac said were donated. Thus, the origins of the Leeds miniature Bible remain shrouded in mystery.

A King Among Princes

The Leeds miniature Bible was a reproduction of the famous 16th century Chained Bible . Also discovered in the collection of artifacts at the library was a copy of Nouveau Cours de Mathematique , by Bernard Forest de Bélidor (1725) and Oliver Twiss. BBC says this was “a rip-off version’ of Charles Dickens’ Oliver Twist, ” which was printed by the creators of the Penny Dreadfuls, a popular serial horror story published in weekly parts, each costing one penny.

Also among the discoveries was a 1497 copy of the Nuremberg Chronicle . This highly illustrated encyclopedia of world history not only includes a guide to both Christian and secular ancient cities, but it also presents a host of mythological creatures from around the world.

Librarians are now hoping the tiny Bible in Leeds, and all the other items found with it, will be enjoyed by all visitors, and not just academics and researchers. 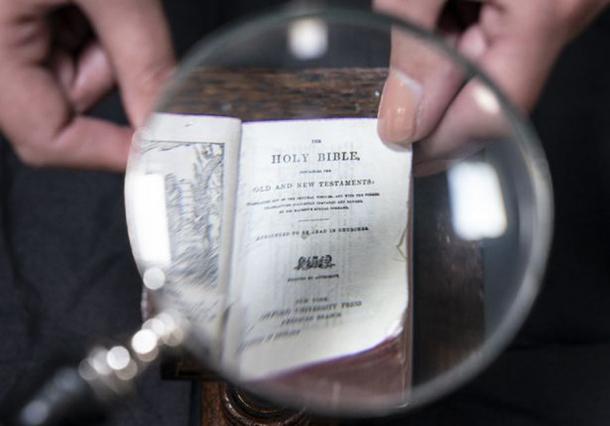 If you wanted to read the Leeds miniature Bible a magnifying glass is required! ( LeedsLive)

Books Are Made for Reading!

The library announced that if people get in touch before they visit the library, staff can bring the books out and show them to groups. The librarian reminds that books were made “for reading” and that they encourage people to come in to see them, instead of locking them away.

This offer to the public is not only designed to show off the book and attract new tourist income . The library staff still hope someone might pop up with information as to where the Leeds miniature Bible came from.