SCIENCE & TECH: Kiribati Coconut Armor – Not as Nutty as it Sounds!

At first sight, Kiribati armor might look a little strange, it is certainly not a suit of armor as we tend to think of it.  It was surprisingly effective, given that it was made from coconut fibers, and little else. Kiribati society changed drastically after their first encounters with westerners, but their armor offers a fascinating glimpse into what Kiribati life used to be like.

Who are the Kiribati?

The nation, known today as the Republic of Kiribati, was once known as I-Kiribati. It is a nation made up of thirty-three coral atolls that are spread over 1.3 million square miles (3.5 million square kilometers). The islands are located in Micronesia, a region of the Western Pacific.

The islands have been inhabited by Austronesian peoples speaking the same Oceanic language since sometime between 3000 BC and 1300 AD. Rather than one people, the islands feature a high level of cultural diversity. Early Samoan, Tongan, and Fijian visitors brought in Polynesian and Melanesian cultural aspects.

The fact that the islands were so spread out, and so prone to new visitors coming and settling, meant that the Kiribati had to become adept at not only defending themselves, but also solving land disputes. This is where the indigenous Kiribati armor comes from. 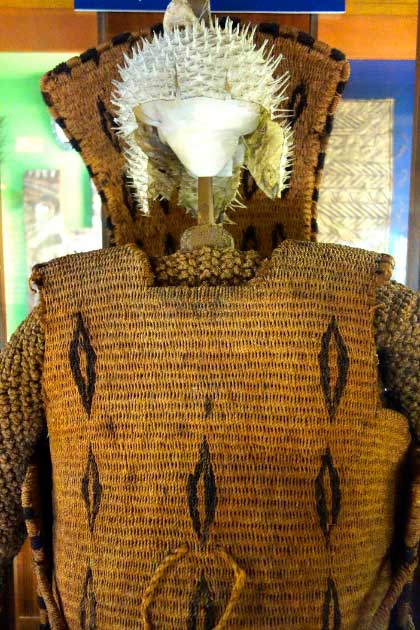 What is Kiribati Armor?

Being relatively isolated on a chain of islands meant the Kiribati people had limited resources, and so became adept at creating impressive objects from relatively rudimentary materials.

Kiribati armor was designed to offer protection from the shark-toothed swords, spears, and daggers that rival warriors often carried. The suit was a set of overalls and sleeves which were woven from coconut fiber. On top of this, a coconut cuirass was worn. This cuirass was distinctive, in that it often came with a high backboard to protect from back attacks.

On top of the cuirass, warriors wore thick belts, also made from woven coconut fiber, or sometimes dried ray skin. The belt’s purpose was to offer extra protection to the vital organs. The cuirass was usually decorated with human hair, feathers, or shells – basically anything pretty Kiribati could get their hands on.

On their hands, warriors sometimes wore fearsome gauntlets made from coconut fiber, with shark teeth inlaid on each knuckle. The fibrous material helped warriors retained much of their dexterity, while the teeth gave the warrior a fearsome punch. 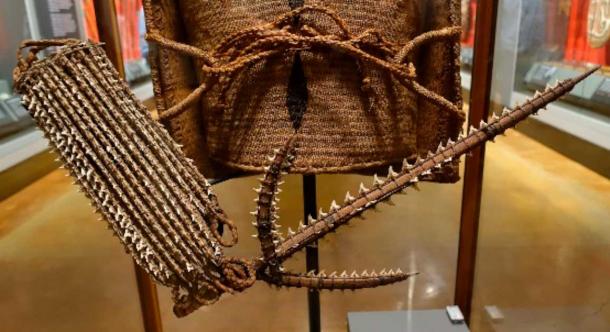 The Kiribati armor of coconut was also used with a gauntlet and dagger or spear, with shark teeth added for extra impact. (Daderot / Public Domain )

To protect the head, helmets were worn. These were made from porcupine fish skin that had been left in the sun to dry out and harden. Just as with helmets from other parts of the world, beneath the Kiribati helm was a cap. The cap was made from yet more coconut fiber, or woven pandanus leaves. 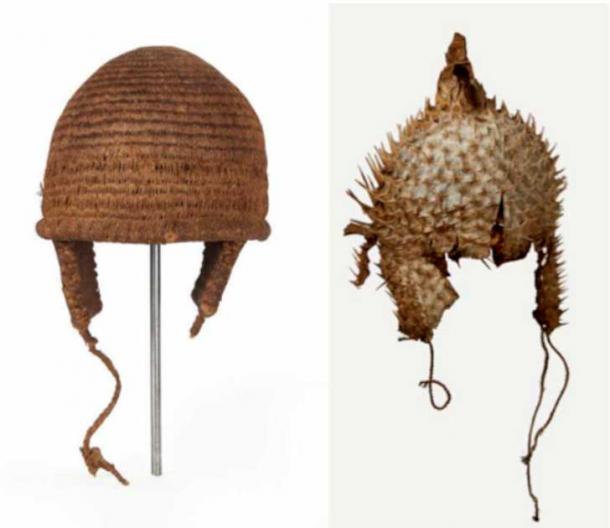 Left: Helmet made of coconut fiber. Two ear guards extend from the rim of the helmet, and plaited coconut fiber ties for fastening extend from these ear guards. (British Museum / CC BY SA 4.0 ). Right: Helmet made of porcupine fish skin and coconut fiber. The body of a porcupine fish has been expanded and made into a helmet. Ear guards are cut from the fish’s body and a two-ply twisted coir tie is used for fastening (British Museum / CC BY SA 4.0 ).

Early Kiribati’s history was all transmitted orally, meaning there are very few existing records. Unfortunately, this means we have no way of knowing how long the custom of Kiribati coconut armor has existed.

Coconut fiber string was used for its availability as well as its high level of strength and flexibility. The fibers came from the coconut husk (the layer between the inner and outer shells), and were soaked in the water of a lagoon for two to three months. They were then rinsed, dried, and rolled into small strands.

The strands were then rolled together to create longer cords, and those cords were then woven together to craft the coconut armor. The multiple layers of fiber accumulated to offer a good degree of protection. In some ways, it was not unlike the modern idea of Kevlar armor, which is made up of a synthetic fiber that is woven together.

The Kiribati armor also made heavy use of human hair. Human hair was both special to Kiribati culture and readily available. Hair was used to decorate the armor and bind shark teeth to swords.

Once finished, the armor was put through a powerful ritual meant to instill the armor with the power and properties of the base materials it had been crafted from. The wearer went through a similar ritual, binding them to their weapons and armor.

Kiribati Coconut Armor in Use

Generally speaking, the armor was used when land disputes or claims of retribution cropped up between either individuals or groups. The Kiribati approach to war was refreshingly different from that of most people. The Kiribati were a people used to dealing with limited resources, so waste was unacceptable. To take a person’s life was to waste a valuable resource. 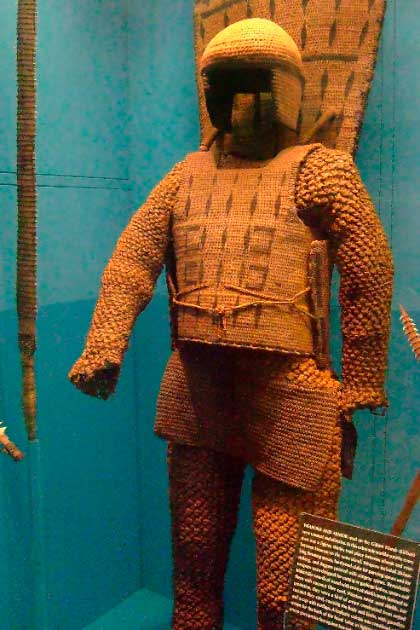 Kiribati armor made of coconut fiber could protect against low-velocity musketballs; however, their culture respected life and settled disputes by merely wounding their opponent ( Mary Harrsch / CC BY NC SA 2.0 )

As such, the goal of Kiribati combat was not to kill but only wound. If you did kill someone from the opposing side, payment had to be made. This was usually a gift of land, the very thing most contests were about in the first place.

Kiribati combat was a kind of group duel. The armored warrior carried a spear lined with shark teeth and tipped with a stingray barb. He was flanked by several unarmored allies who carried spears, clubs, and small daggers. In bigger fights, such as those between villages or islands, the forces marched in three groups, with the armored ‘heroes’ in the center. 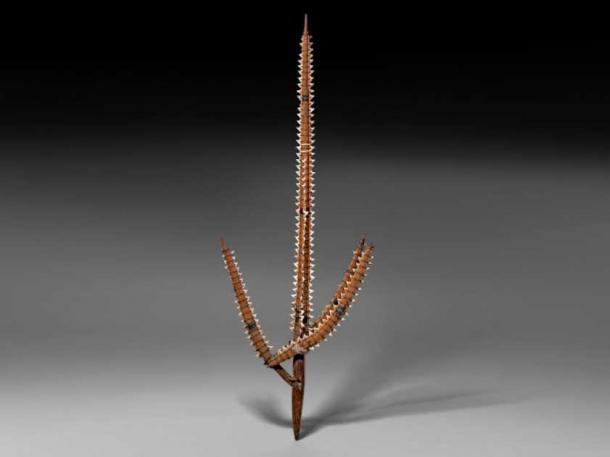 The coconut armor could even resist most blows from a shark tooth spear! This weapon consisted of a pointed staff of palm wood surrounded with rows of sharks’ teeth, bound with coconut coir and edged with ribs of leaves. At the base are three curved limbs, each having two rows of shark teeth of similar construction. (British Museum / CC BY SA 4.0 )

When the opposing sides met, it was not all-out warfare. Instead, the outcome of the battle came down to individual challenges made by the warriors. The focus of these battles was only to wound the opponent, not kill.

Kiribati Armor and the West

The Kiribati were isolated from the West for many centuries. Then, in 1606 Pedro Fernandes de Queiros came across the islands. The British explorers John Byron, Thomas Gilbert, and John Marshall then passed through the island chain between 1764 and 1788. Russian and American adventurers then fully mapped the islands in the early 19th century.

It was around this time that Kiribati armor first started appearing in western collections. Not long after this, however, the armor started to disappear. This is believed to be due to the French and British missionaries, the great destroyers of many native cultures, who descended on the island between 1888 and 1892. 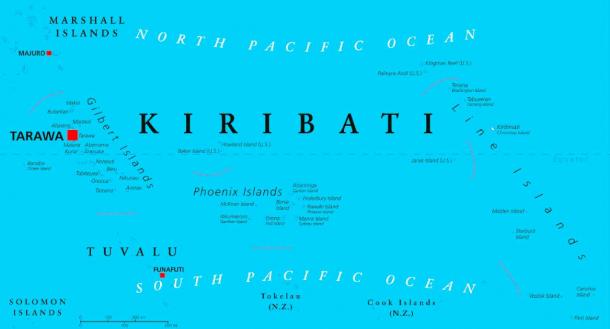 These missionary colonizers attempted to ‘modernize and pacify’ the islanders by introducing new laws. The old ways of settling disputes were out. As a people, the Kiribati only produced what was needed. As soon as they no longer needed the armor, they stopped producing it. They also did not believe in keeping things they did not need, so all the existing sets of armor were quickly offered away to tourists, diplomats, explorers, and whalers.

Today, there are far more suits of Kiribati armor in foreign hands than native. It is believed the only examples of the armor on the island are in Te Umwanibong, the Kiribati Museum and Cultural Centre on the Tarawa atoll. When the Pacific Presences Project, based at the Museum of Archaeology and Anthropology, University of Cambridge decided to recreate the armor, they had to use New Zealand-based artists, as the Kiribati themselves had long lost the know-how.

It would be sad to think that the Kiribati people lost so much of their culture due to colonization, but thankfully, this is not true. Kiribati separated from the British Empire in 1979, and since then, traditional Kiribati culture has seen a resurgence.

The image of the Kiribati warrior has reemerged, and is commonly seen on clothing and mascots for island sports teams. It is a symbol of strength and pride that younger islanders have gravitated to, proud of their heritage.

Top image: The backboard of the Kiribati armor was designed to protect from rear attacks (British Museum / CC BY SA 4.0 )