A new study published in the Journal of Conflict Archaeology has suggested that many remains of the roughly 60,000 Waterloo soldiers who died in the Battle of Waterloo in June 1815 may have been stolen by grave robbers and sold for making bone fertilizer across Europe, but especially in Britain. Professor Tony Pollard of the University of Glasgow, the author of the study, feels mass-grave raiding of Waterloo soldiers is the likely answer to the mystery of why so few human remains were recovered at the famous and extensive battlefield.

“European battlefields may have provided a convenient source of bone that could be ground down into bone meal, an effective form of fertilizer. One of the main markets for this raw material was the British Isles,” said Pollard, who is the director of the Centre for Battlefield Archaeology at the University of Glasgow, to CTV News . He also said, according to IFL Science , “At least three newspaper articles from the 1820s onwards reference the importing of human bones from European battlefields for the purpose of producing fertilizer.”

If grave robbers did raid mass graves of Waterloo soldiers for bones to sell on the “black fertilizer market,” then Hougoumont is an excellent example of “where are all the dead.” Several accounts place a mass Waterloo casualty grave at the Hougoumont farm, shown here. (Alta Falisa / CC BY-SA 4.0 )

Firsthand Proof of What Happened to the Waterloo Soldiers?

The Battle of Waterloo , fought at Waterloo south of Brussels on 18 June 1815, was the last action of the Napoleonic Wars. A French army led by Napoleon was routed by a coalition of a British-led army, with units from United Kingdom, the Netherlands, Hanover, Brunswick, and Nassau under the Duke of Wellington, and a Prussian army under the command of Field Marshal von Blucher. Both sides suffered heavy losses, but human remains commensurate with the mass casualty rate have never been found.

According to the Jerusalem Post , the study examines firsthand accounts preserved in memoirs, journals, and artwork.

James Ker, a Scottish merchant living in Brussels, wrote of visiting the battlefield soon after the action was over and holding dying men in his arms. Newman Smith, another contemporary visitor to the battlegrounds, reports seeing “numerous wagons removing the wounded” while many remained untouched.

Other Battle of Waterloo accounts describe the disposal of the dead. Sir Walter Scott wrote in August 1815, “All ghastly remains of the carnage had been either burned or buried, and the relics of the fray which yet remained were not in themselves of a very imposing kind.” Charlotte Eaton also wrote of the aftermath of the battle, while James Rouse has left sketches of the carnage and its clearing up.

Together, these indicate the locations of at least three mass graves where the bodies of more than 13,000 soldiers were buried, as well as ash piles of those who couldn’t be buried.

However, Pollard feels that these locations in La Haye Sainte and Hougoumont will not yield much in the way of human remains. 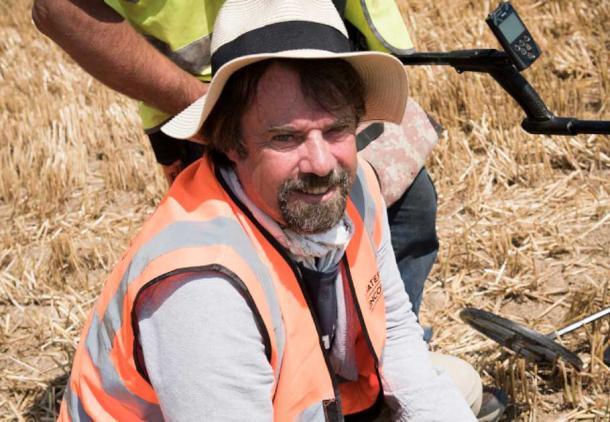 Professor Tony Pollard, who authored the recent Waterloo research paper, at the site of the Battle of Waterloo in Belgium as part of the Waterloo Uncovered team that is looking into what happened to all those “unfound” bodies. ( Chris Van Houts / University of Glasgow)

Few Remains Have Been Found Over the Years

Several archaeological excavations at the site of the battle over the years have failed to discover evidence of the mass graves. In 2015, construction work for a new museum and car park did uncover a human skeleton , reports a press release by the University of Glasgow .

Amputated human leg bones were also unearthed in an excavation of the main allied field hospital in 2019. Moreover, the museum in Waterloo houses a human skeleton that could have come from the battle. Apart from these, no other substantial remains have ever been found at the site. How can this be?

Pollard believes the same accounts that he has studied may have acted like treasure maps to bone grinders. “It’s likely that an agent of a purveyor of bones would arrive at the battlefield with high expectations of securing their prize. Primary targets would be mass graves, as they would have enough bodies in them to merit the effort of digging the bones. Local people would have been able to point these agents to the locations of the mass graves, as many of them would have vivid memories of the burials taking place, or may even have helped with the digging,” said Pollard to IFL Science .

Combined with the fact that bone meal formed an important source of phosphate fertilizer in the period, Pollard feels that the mass graves at Waterloo likely ended up being raided by grave robbers for bones. “On the basis of these accounts, backed up by the well attested importance of bone meal in the practice of agriculture, the emptying of mass graves at Waterloo in order to obtain bones seems feasible, and the likely conclusion is that,” he said to CTV News .

Pollard hopes to prove his theory through a multi-year geophysical survey of Battle of Waterloo gravesites based on primary accounts. “If human remains have been removed on the scale proposed then there should be, at least in some cases, archaeological evidence of the pits from which they were taken, however truncated and poorly defined these might be,” he explained to the Jerusalem Post .’

Pollard’s future research may be able to provide a clearer picture of where the remains of the fallen Waterloo soldiers finally ended up. Did they find restful sleep after the carnage or were they ruthlessly dug up and scattered over agricultural fields in Britain?

Top image: Battle of Waterloo soldiers fighting at the Hougoumont Chateau as portrayed in a watercolor by Denis Dighton. Source: Public Domain

(Visited 25 times, 1 visits today)
Join us on Telegram
KNOWLEDGE is POWER / REAL NEWS is KEY
Woke & Liberal News is Fake News
You will find it on:
CNN - CBS - MSNBC - ABC - The New York Times - The Washington Post - Facebook - Twitter and more
They ALL SUCKS and simply DO NOT tell you the truth PERIOD