What were the origins of the first farmers? Where did they come from and where did they go? This question was recently asked by a team of scientists studying the genomes of Europe’s first farmers. They found their answer in Asia.

Genomes from 167 ancient bodies from Anatolia, Greece, Serbia, Austria and Germany have been analyzed using new deep sequencing technologies. The team of scientists concluded that the genetic origins of ancient European farmers is much more complicated than currently believed.

In conclusion the researchers say that at the end of the last Ice Age, around 12,900 years ago, the first farmers spread from Asia westwards into Europe. However, although these farmers came from the east, they all had genetics from much earlier European Paleolithic hunters.

A new study published in the journal Cell says the world´s first farmers originated from the mixing of two groups of hunter-gatherers ´brought together by dramatic climate change 12,900 years ago.´ Study author Laurent Excoffier at the University of Bern, Switzerland, says the new results demonstrate that Europe’s first farmers ´did not´, as was previously thought, originate from a single group in Asia . These early agriculturists were in fact descendants of hunter-gatherers from both Europe and the Near East.

The paper explains that after the Last Glacial Maximum, about 20,000 years ago global temperatures plummeted. Paleolithic European hunter-gatherers faced extinction and many headed east where they bred with Near-Eastern hunter-gatherers. It was their descendants who headed back westwards and seeded the spread of agriculture all over Europe. 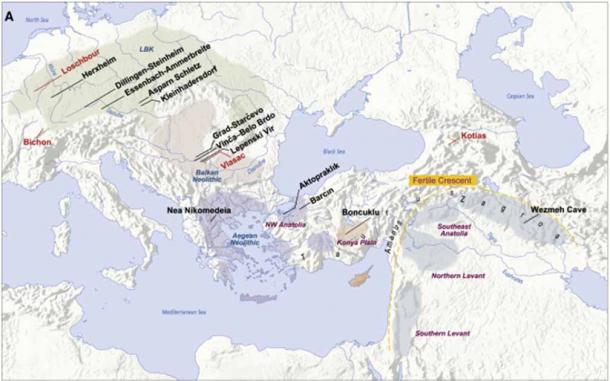 Spatial and temporal distribution of the ancient genomes analyzed in this study. (A) Location of archaeological sites with newly sequenced genomes and additional genomes used for modeling: Neolithic (black) and Mesolithic or Palaeolithic (red); different chronological phases of Neolithic expansion (colored areas) and archaeological cultures (blue) along the Danubian route of Neolithization; geographical areas (purple).

The researchers analyzed genomes from the 167 skeletons with a technique called ‘deep sequencing’. This next-generation sequencing ( NGS) technique scanned genomic regions thousands of times and study author Laurent Excoffier at the University of Bern said this approach yielded much higher-quality data than traditional sequencing methods. The results of the deep genome analysis were then refined with ´geographical, cultural, archaeological, and climate data´, according to the study.

Archaeologists have long known that the first farming occurred on the so-called Fertile Crescent in the Middle East, about 11,000 years ago. This region is also known as the ´ Cradle of Civilization´ because along with farming, a suite of technological innovations, including the wheel and writing, emerged here. However, Dr Excoffier said with deep sequencing scientists can now get high resolution data about the farmers demographic history, population swells and declines.

Farming Took A Chip Of The Old Block

Study author Nina Marchi from the University of Bern said the new research shows that the first farmers of Anatolia and Europe ´emerged from a population mixed between hunter-gatherers from Europe and the Near East.’ A report in Daily Mail says farming gradually spread from Asia westwards through Europe, starting around 9,000 years ago in Greece and that it eventually reached Britain 2000 years later.

SCIENCE & TECH: A Lost Primeval World Has Been Found in a Giant South China Sinkhole!

While it was always known Europe’s first farmers were descended from hunter-gatherer populations in Anatolia, the large peninsula in Western Asia, the new study shows that these genes didn´t come from one single region in Asia. Furthermore, the study reveals that when these farmers switched from hunting and gathering ´they took an average 1.5 inches off their height´. The team said this discovery indicates poorer health, and that people were not getting the nutrition required for growth.

The Eastern Origins Of European Farming

Excoffier concluded that while this study brought interesting historical insights, in the bigger picture, it flies a flag for ´high-quality genomic data.´ The scientist argues that researchers should now be extracting as much information as possible from ancient skeletons, which are ´too limited and too precious not to be optimally analyzed´.

It is now known, for sure, that Western European hunter gatherer groups suffered population collapses during the Last Glacial Maximum and that some of them travelled to what is today the Near East. There, they bred with eastern cultures and developed agricultural methods and later headed back to south-eastern Europe to apply what they had learned out east, and so farming was born in Europe.

Top image: Dolmen of Poloutin in a cornfield, representing the origins of farming.           Source: aluxum/Adobe Stock

(Visited 12 times, 1 visits today)
Join us on Telegram
KNOWLEDGE is POWER / REAL NEWS is KEY
Woke & Liberal News is Fake News
You will find it on:
CNN - CBS - MSNBC - ABC - The New York Times - The Washington Post - Facebook - Twitter and more
They ALL SUCKS and simply DO NOT tell you the truth PERIOD