The last man to serve as King of Greece, Constantine II, passed away on January 10, 2023 in an Athens hospital from complications related to a stroke. Constantine II hadn’t served as king since the late 1960s, when he was forced into exile (the Greek monarchy was officially terminated via referendum in 1974). Nevertheless, his funeral in Athens on January 16 was attended by the members of the royal families of multiple European countries, showing that among his peers (and cousins in many cases) Greece’s final king was still recognized as a figure worthy of honor and respect.

The guest list of dignitaries who attended Constantine II’s funeral at the Metropolitan Cathedral in Athens included Princess Anne of Britain and King Felipe (Constantine II’s nephew) and Queen Letizia of Spain. They were joined by royals from Denmark, Norway, Sweden, the Netherlands, Luxembourg, Belgium and Monaco, who came to Athens to pay tribute to a king whose reign ended prematurely and in ignominy.

His second cousin, King Charles III of Britain, and his godson, Prince William, sent their respects but were unable to attend the ceremony.

Despite Constantine not having served as king for more than five decades, his fellow aristocrats were not the only ones interested in attending the funeral. Thousands of people stood outside of a nearby chapel, where the former king’s coffin was put on display, to say goodbye to a figure who had once been Greece’s head of state—and at least for a time, a beloved one.

The Kingdom of Greece: A Brief History

Constantine II ascended to the throne of the Kingdom of Greece in 1964, succeeding his father, King Paul, who was the son of the first king to have been born in Greece, Constantine I. The royal bloodline of these individuals could be traced back to the German House of Glucksberg, from which various kings of Denmark, Sweden, Norway and Iceland were also descended.

That house supplied the people of Greece with its second monarch, in the form of Prince Vilhelm of Denmark. who was officially recognized as George I when he ascended to the throne in 1862. George I succeeded the German-born King Otto, who was chosen to be the first monarch of the Kingdom of Greece in 1832. Previously Greece had been a part of the Ottoman Empire , but after their successful war of independence (1821-1829) their patrons in Russia, France and Britain helped them convert to a constitutional monarchy, which at the beginning would be led by European royalty from elsewhere.

The Greek monarchy actually ruled the country in two phases, from 1832 to 1924 and again from 1935 through 1973. The republican government that replaced the first monarchy in the 1920s ultimately fell out of favor, inspiring the Greek people to return the keys to the kingdom to the latest descendants of the royal House of Glucksberg. King Paul served from 1947 until his death in 1964, after which the crown was passed to his son Constantine II, who was destined to be the last person to lead the Greek monarchy.

Remembering the Sad and Short Reign of Constantine II

Constantine II became the king of Greece in 1964, when he was just 27 years old. But only three years later he was forced to flee with his family, and he would remain in exile for decades.

When a group of military officers suddenly seized power in Greece in April 1967, Constantine II found himself in an impossible situation. Given the swiftness of the military coup and the high level of support it had among the officer class in general, the king felt he had no choice but to accept the rule of the military dictatorship, and he was forced to swear in its leaders.

But Constantine began planning a way to return to power as soon as he made that fateful decision. The king tried to foment rebellion and lead a countercoup later in the year, but he was unable to secure the military support he needed from the United States or from European allies. As a result his attempt to regain control of the country proved futile, and in December of 1967 he and his wife, Princess Anne-Marie of Denmark, left for Italy to escape the wrath of the junta.

Constantine II remained the king officially until 1973, when the Greek people voted in a referendum to replace the military junta with a democratically elected government. But he was blamed by a significant percentage of the country for his initial recognition of the military coup (why didn’t he resist, the Greek people wanted to know), and his association (fairly or unfairly) with a detested dictatorial regime made him deeply unpopular long after he’d fled the country.

Eventually, Constantine II was able to return to Greece, as a private citizen who had pledged his full support to the existing democratically elected government of his home country. Nevertheless he was stripped of his citizenship in the 1990s, and he remained a controversial figure in the country for the duration of his life. 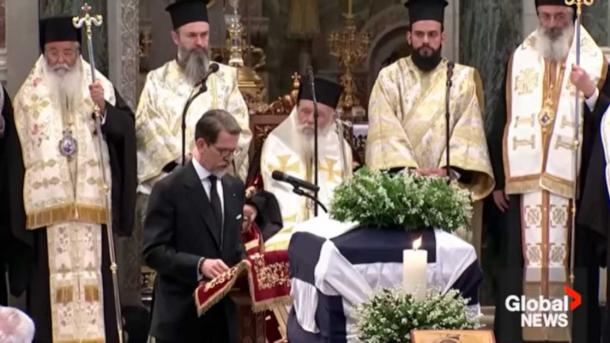 Constantine’s son, Pavlos, speaks at the funeral service at the Metropolitan Cathedral of Athens (YouTube Screenshot )

Constantine II’s funeral service was officiated by the country’s Archbishop. However, the ceremony was a private affair and not a state funeral, which could have been authorized by the Greek government but was not.

Greek Prime Minister Kyriakos Mitsotakis and President Katerina Sakellaropoulou chose not to attend the services. But the government was represented, by Deputy Prime Minister Panagiotis Pikrammenos and Culture and Sports Minister Lina Mendoni.

Mitsotakis stated that it was the right decision not to hold a state funeral, stressing that the former king was the leader of the “Kingdom of Greece, which no longer exists.” Expressing the negative feelings of many, the Prime Minister said that history “will judge Constantine fairly and harshly.”

Constantine II’s body will be laid to rest on the grounds of the royal family’s estate at Tatoi, which is located 17 miles (27 kilometers) from Athens. He will be buried alongside his ancestors, who include all but one of Greece’s past kings.

Top image: Scene from the funeral service for Constantine II at the Metropolitan Cathedral of Athens. Source: YouTube Screenshot

(Visited 3 times, 1 visits today)
Join us on Telegram
KNOWLEDGE is POWER / REAL NEWS is KEY
Woke & Liberal News is Fake News
You will find it on:
CNN - CBS - MSNBC - ABC - The New York Times - The Washington Post - Facebook - Twitter and more
They ALL SUCKS and simply DO NOT tell you the truth PERIOD