Home
Science & Tech
SCIENCE & TECH: England’s Viking Cuerdale Hoard Is The Second Biggest Of Them All!

SCIENCE & TECH: England’s Viking Cuerdale Hoard Is The Second Biggest Of Them All!


There are Viking hoards and then there are amazing Viking hoards. England’s Cuerdale Hoard, discovered in the 1840s, is in the amazing category in more ways than one! In terms of weight and number of pieces, it is second only to the Spillings Hoard found on Gotland, Sweden in 1999 (weighing 67 kilograms or 147 pounds). The Cuerdale Hoard, weighing roughly 40 kilograms or 88 pounds, is believed to date to the early 10th century AD, while the Spillings Hoard has been dated to between the 9th and 12th century AD.

The Cuerdale Hoard contains about 8600 silver artifacts (for reference, the Spillings Hoard contained over 14,000 artifacts). Though a large part of the Cuerdale treasure consists of coins, it also includes ingots, jewelry, and hacksilver. Regarding the coins, the majority were found to be from England mostly issued by Vikings, though there are also coins of foreign origin.

The Cuerdale Hoard Collected In A Lead Chest Over Time

The hoard was originally packed into a lead chest, fragments of which survived. Small bone pins were also found amongst the hoard’s artifacts. These objects suggest that some of the objects had been packed into separate bags, which were secured by these pins. If so, this may be an indication that the Cuerdale Hoard was a stockpile of wealth that was built up at different times and places. Nevertheless, it is uncertain if objects were placed in the hoard over a period of time or all in one go.

Thanks to the prompt action by the landowner’s bailiff, almost the entire hoard was retrieved. The workmen were allowed to keep a silver coin each as a reward. On 15th August 1840, an inquest declared the Cuerdale Hoard a Treasure Trove, and the property of Queen Victoria , in right of her Duchy of Lancashire. The hoard was then handed over by the Duchy to the British Museum . At the British Museum, the contents of the hoard were examined, before being distributed to over 170 recipients. The majority of the artifacts in the hoard, nevertheless, were retained by British Museum. 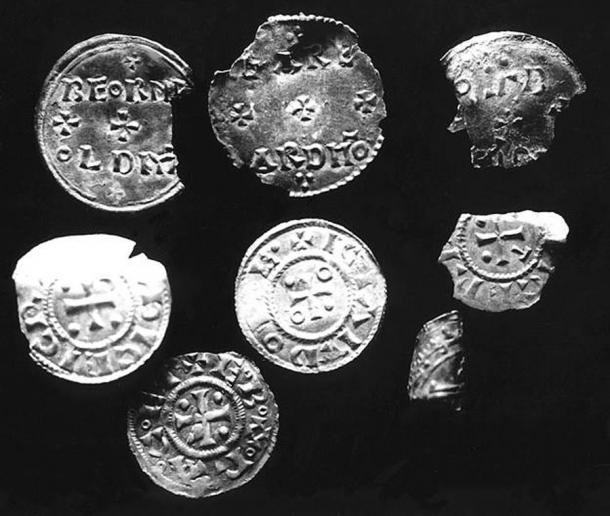 Viking, Saxon, and Arabic coins that made up the Thurcaston Viking mixed coin hoard indicated that a bullion economy still operated in some sections of society in the Danelaw as late as the 920s AD. (The Portable Antiquities Scheme/ The Trustees of the British Museum / CC BY-SA 4.0 )

The Cuerdale Hoard consists mainly of silver coins, numbering over 7000 coins. It was from these coins that the date of the hoard was estimated. It is thought that the Cuerdale Hoard was buried sometime between 905 and 910 AD. This was established from the fact that most of the Cuerdale coins were of Danelaw issue.

Danelaw was the part of England in which the laws of the Danish Vikings were followed as opposed to the laws of the Anglo-Saxons. The Danelaw laws were quite different from “English” West Saxon and Mercian law. The term is first recorded in the early 11th century AD. The areas of Danelaw were in northern and eastern England, which has long been occupied by Danes and other Norsemen.

The Danelaw coins make up more than 70% of the entire coin hoard at 5000 pieces. These coins were found to be in relatively new condition, which suggests that they became part of the hoard only a few years after being put into circulation, i.e., in the beginning of the 10th century.

Apart from providing an estimated date for the hoard’s burial, the hoard’s coins also provide a glimpse into the links that the Vikings had with the rest of the world during the late 9th and early 10th centuries.

In addition to the Danelaw coins, the Cuerdale Hoard also contains coinage from the Vikings’ Anglo-Saxon neighbors. These coins number at around 1000 of the 7000 total.

Another 1000 coins were found to be of Frankish origin. It is thought that these coins may have ended up in the hands of the Vikings as a result of the many raids they conducted in continental Europe.

Other types of coins in the Cuerdale Hoard include a few early Scandinavian coins, about 50 Kufic dirhams from various parts of the Islamic world, several imitation Kufic coins from eastern Europe, and a single Byzantine coin. It is believed that these coins, in contrast to the Frankish ones, did not arrive in England as a result of raids but more likely through trade. This would be a reflection of the links the Vikings had with the east via the Russian river systems . 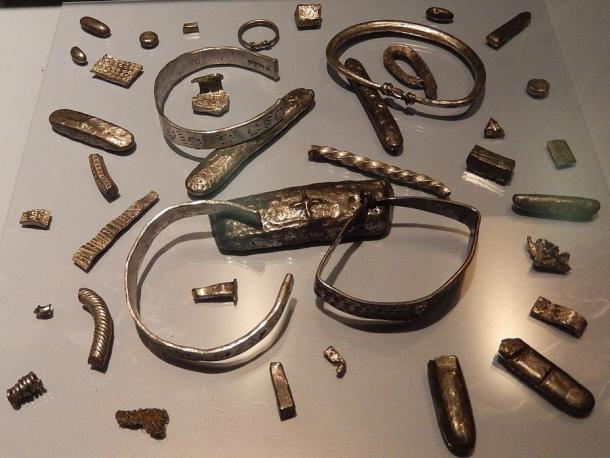 Pieces from the Cuerdale Hoard at the Ahmolean Museum in Oxford. (BabelStone / CC BY-SA 3.0 )

Although coins are the most abundant artifacts in the Cuerdale Hoard, they only make up a fraction of the weight, weighing less than 4 kilograms (8.8 pounds). The remainder of the weight, i.e., about 36 kilograms (79.4 pounds) was silver bullion. These artifacts include silver ingots, jewelry, and hacksilver. Hacksilver are silver objects that were broken into fragments either to be melted or used as bullion payment.

Based on the forms and decorations of the objects, their origins can be determined. For example, there are many bossed penannular brooches and thistle brooches, which are of Norse-Irish origin. Objects from Scandinavia included arm-rings and neck-rings. Moreover, contact with France is reflected in a Carolingian buckle and some brooch fragments. A silver sheet and a part of a silver comb are believed to be of Pictish origin.

Curiously, there are only two objects of Anglo-Saxon origin: a fine strap-end and a tiny mount. This is especially strange considering the large number of Anglo-Saxon coins in the hoard. 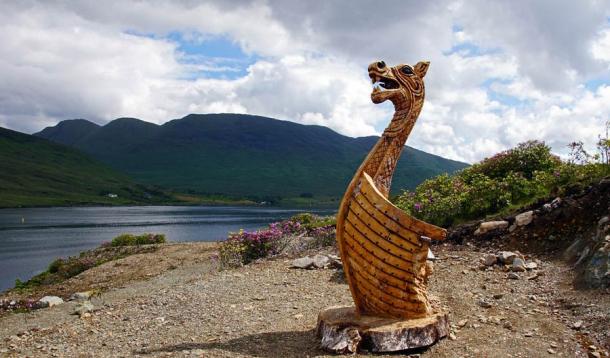 One of the theories about why the hoard was created in the first place relates to the Irish Vikings. This monument at Killary Fjord Connemara, Ireland honors this part of Viking history. ( Jürgen Hamann / Adobe Stock)

But Why Was This Hoard Hidden Is The Big Question

It is not entirely clear as to why the Cuerdale Hoard was created in the first place. According to one hypothesis, the hoard had belonged to the Vikings from Dublin who had been expelled from the city at the beginning of the 10th century. The hypothesis goes on to state that the hoard was a war chest put together by these Vikings as part of an effort to recapture Dublin. This hypothesis is supported by the fact that, as mentioned earlier, a large number of the silver artifacts are of Norse-Irish origin.

An alternative hypothesis claims that the hoard belonged to a local chief and was meant to serve as a kind of safety deposit. The chief could go to the hoard, dig it out, and take the silver that he needed.

Alternatively, it has been suggested that the hoard was buried for safekeeping in times of trouble. The owner probably intended to retrieve the hoard in more peaceful times but never had the chance.

As mentioned earlier, after the hoard’s examination by the British Museum, it was dispersed to more than 170 recipients. Amongst these recipients are the Ashmolean Museum in Oxford, and the Château-musée de Boulogne-sur-Mer in France. The objects in the Ashmolean Museum, around 60 in total, were acquired by Sir John Evans and presented to the museum in 1909 by his son, Sir Arthur Evans. The Château-musée de Boulogne-sur-Mer, on the other hand, received some silver coins that were minted at Quentovic, a Frankish emporium in the Early Middle Ages, in northern France.

To conclude, the Cuerdale Hoard is considered to be one of the most remarkable Viking hoards ever discovered. The huge amount of silver contained in the hoard is itself astounding. Moreover, the variety of objects in the hoard makes it even more interesting, as it reveals the links that the Vikings in England had with continental Europe and beyond.

(Visited 7 times, 1 visits today)
Join @usnewscom on Telegram
KNOWLEDGE is POWER / REAL NEWS is KEY
Woke & Liberal News is Fake News
You will find it on:
CNN - CBS - MSNBC - ABC - The New York Times - The Washington Post - Facebook - Twitter and more
They ALL SUCKS and simply DO NOT tell you the truth PERIOD