In 1929, a small child discovered an intricate golden helmet in the Poiana Coțofenești village of Romania. Archaeologists determined that it was a stray find from a group of Thracian tribes that existed during the late Iron Age. These tribes were known for their ferocity and fighting skills, as well as their metalworking. These two skills went hand in hand with the need for protective armor during times of battle. The golden helmet of Coțofenești is a lasting example of Thracian artistry and craftsmanship.

A Little Boy’s Discovery of a Lifetime

After the Helmet of Coțofenești was discovered by Traian Simion, a young boy native to the region, experts took the helmet for extensive analysis. They determined that the helmet was nearly a kilogram in weight and was surprisingly well-preserved for its age. Given that it likely belonged to one of many Thracian tribes, they estimated it to have been made sometime around 400 BC. After looking at the details of the helmet, they determined that it must have belonged to the Geto- Dacian tribe. They were known for designs including triangles, spirals, strips, and rosettes, which are displayed in multiple places on the helmet.

Experts analyzing the Helmet of Coțofenești realized that it wasn’t any ordinary protective headgear. Rather than making a helmet for pure protection, it became clear that the maker designed the helmet as something special. The helmet displays several detailed images and designs that suggest that this was a specially-crafted piece for a person of interest. Archaeologists determined that the piece likely belonged to a king in the Geto-Dacian tribe, if not another noble in a related tribe. Those with bigger dreams believe the helmet is actually the sacred helmet of Zalmoxis, a divine being worshipped by the Geto-Dacian tribe. However, there is little evidence for this hypothesis.

1930s archaeological sketch of the mythological scenes on the Golden Helmet of Coţofeneşti. ( Public Domain )

Whoever the Helmet of Coțofenești belonged to took excellent care of it, given the nearly-perfect condition it was found in. With the exception of the missing top, the rest of the helmet has little to no damage. Each of the images depicted on the helmet is clear and can easily be interpreted. Such a finding was significant to archaeologists in the region, since time is often not so kind to the details of such ancient pieces. Luckily, the metals used to make the unique golden helmet were durable enough to stand the test of time.

The largest part of the Helmet of Coțofenești is covered with large studs around the head. Across the forehead portion of the gold helmet are two carefully-carved apotropaic eyes, which were believed to ward off evil magic , such as the evil eye . Around the base of the helmet are multiple detailed scenes. Each of these scenes comes with its own interpretation, although archaeologists acknowledge that they likely had a contextual background that may not be entirely clear today. 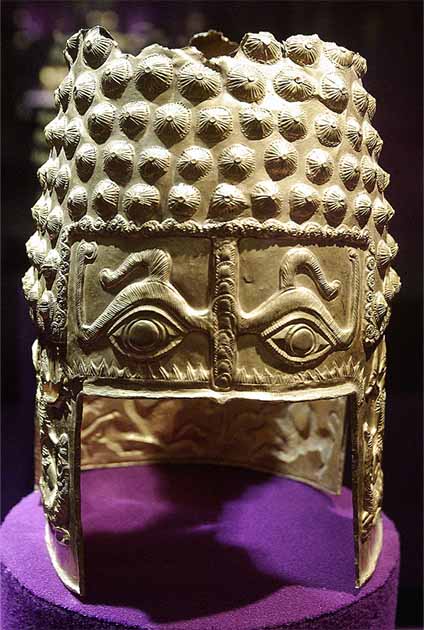 The cheeks of the Helmet of Coțofenești depict an animal sacrifice. Specifically, a man is sacrificing a ram by slitting its throat with a small knife. Some relate it to the Mithraic Mysteries , a cult religion that focused on the god Mithras. The religion’s most popular scene was of Mithras killing a bull in a similar fashion to the man killing a ram on the helmet. Some interpretations claim that the helmet’s owner may have similarly sacrificed a ram, resulting in the depicted image on his helmet. 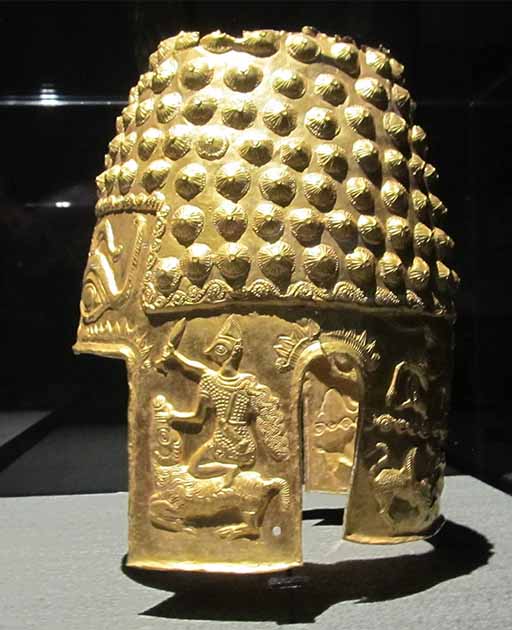 A side view of the Helmet of Coțofenești depicting a ram sacrifice (Nenea Hartia, CC BY-SA 4.0 )

The neck guard of the Helmet of Coțofenești contains two voracious beasts, a common motif in Assyrian art . Historians were able to track the spread of this motif through time using similar artifacts that displayed these beasts. Above this is a scene of three unfamiliar winged creatures. These creatures have human faces and arms, but animal-like tails in addition to their wings. It is believed that these creatures are descendants of sphinxes.

The top of the helmet was damaged some time after its creation, leaving a giant gap exposing the inside of the helmet. Graphic designers digitally reconstructed the helmet without damage to provide a full picture of the helmet in its prime. A full analysis of the fascinating gold helmet determined that the creators were inspired by multiple art styles within the region. While they used many typical Geto-Dacian elements, they also used Iranian and Greek themes in the detailed scenes and apotropaic eyes. 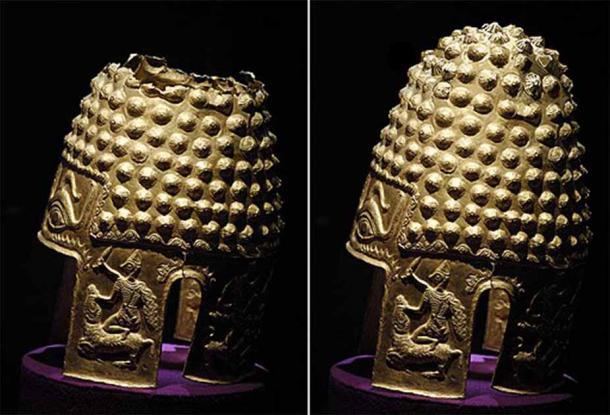 The 4th century BC Helmet of Coțofenești was damaged at some point, with the entire top now missing. A graphic reconstruction shows what it looked like. (© Radu Oltean /  Wikimedia Commons )

The golden Helmet of Coțofenești is just one of many historical artifacts that have found their way into modern film and television. Popular culture has referenced this style of helmet many times, but its first depiction was in the 1966 film The Dacians . In the film, King Decebalus wears an incorrect version of the Helmet of Coțofenești on his head in several scenes. The prop helmet has a flat top rather than a rounded dome-like top, which spread misinformation about the piece. Similarly-designed helmets with flat tops were eventually used in later media, including comic strips. This film also took place nearly 500 years after the real helmet was created, making it historically inaccurate.

Today, the famous golden Helmet of Coțofenești resides in the National History Museum of Romania in Bucharest. Visitors to the area can see the piece for themselves along with the rest of their collection of ancient Thracian artifacts. If you ever find yourself in Bucharest, feel free to stop by and see it for yourself. Just try not to look it in the eyes.