Eyeglasses are an essential tool for thousands of people across the globe. Unfortunately, glasses didn’t always exist, which caused difficulties for those in the ancient past with poor vision. However, the Romans made significant steps towards the correction of vision problems when they discovered that different thicknesses of glass could cause changes in clarity when looking through them. Because of this discovery, eye health has advanced, first from glasses to contacts and now from eyewear to surgical options such as LASIK.

The road from the first creation of glasses to modern ophthalmology was a long one. In this article, we’re going to look into the past to see just how far glasses have come since the Romans. How did the Romans make this discovery in the first place, and how did they navigate crafting glasses for each unique person? And how long did this discovery take to spread across the globe?

The Romans were the first people on record to have created eyeglasses. Roman civilization discovered at some point in history that they could use certain types of glass to magnify objects. The earliest record of this is from Seneca, a Roman tragedian who lived between 4 BC and 65 AD, who reportedly used a glass globe full of water to magnify the text in his books. Decades later, we have evidence that Roman glassblowers were commissioned to make different types of glass spheres that could be used on text to make it larger and clearer to read. These glass spheres were traditionally used by monks in the Middle Ages so they could read religious texts more easily.

Alongside the creation of these spheres, some individuals began embedding these spheres into frames that could be put over their eyes throughout Pisa, Venice, and Florence. Because each person’s vision is different, glassblowers began to experiment with producing spheres of different thickness to change their magnifying abilities. These magnifying lenses were inserted into frames made of animal horn, wood, or leather to be held in front of the face. Other styles were designed to be perched carefully on the nose.

Much of our knowledge about these developments in glasses comes from the observation of Renaissance paintings containing people using handheld or perch glasses. An example of this is Tommaso da Modena’s 1352 fresco cycle of 40 different Dominican scholars at their desks. One painting contains a man using a handheld magnifying glass, and another contains a man using a set of glasses perched atop his nose. It is believed that this is the earliest known painting depicting the use of true glasses. 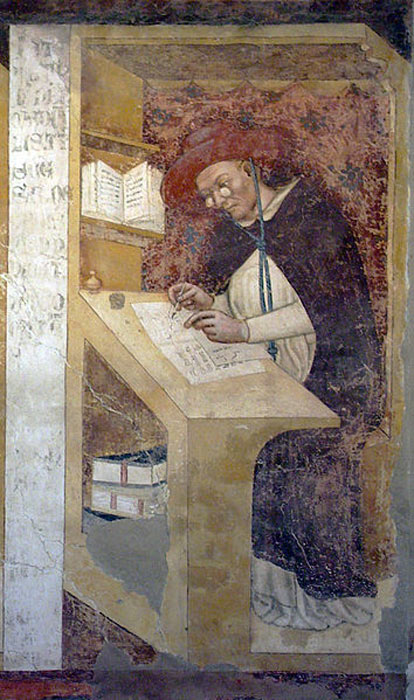 Beyond handheld lenses and perched frames, these glass lenses were also sometimes inserted into leather straps or metal bands. These bands were then strapped around the back of the head to keep hands-free glasses more securely on the face. As more pairs were being made, the craftsmanship improved, with lenses and frames becoming thinner, lighter, and more comfortable over time. As glasses became more popular, early optometrists would work with glassblowers to help customize lenses to fit patients’ specific vision needs. However, these customized glasses were typically quite expensive because of the time and effort involved to create them, so customized glasses were normally reserved for the wealthy.

Interestingly, there is no evidence of women using these early pairs of glasses. Because lenses at the time were used to magnify rather than to clarify, most of the glasses produced were for farsighted individuals so they could read. Since women were not permitted to be literate during this time, they had no societal need for glasses. Even after women became more literate, the cost of glasses was still so expensive that only religious scholars, political leaders, or other wealthy individuals used them.

An Age of Advancement and Convenience

Spanish craftsmen in the 17th century discovered these glasses and decided to use string to tie perch glasses to their ears rather than deal with the discomfort of leather or metal bands. Spanish and Italian missionaries brought many of these glasses with them during their missionary trips, which led to their introduction in China and surrounding countries in Asia. It is believed that while the Chinese had their own form of vision-correcting spectacles, they took this string idea and instead tied weights to the strings so they could be draped over the wearer’s ears and stay on. This was simply one of many early developments of glasses outside of Europe.

The next advancements in European glasses after their early development by the Romans occurred in England in the 18th century. Benjamin Martin, a famous eyeglass manufacturer, was the first individual to create eyeglasses that perch on the nose and sit over the ears. These spectacles were called “Martin’s Margins,” and are still incredibly famous with collectors today. They were designed with perfectly round lenses with black rims designed to protect wearers from light damage and decrease glare. Most of the frames are made from either silver or steel, with the black rims being made of either horn or tortoiseshell. 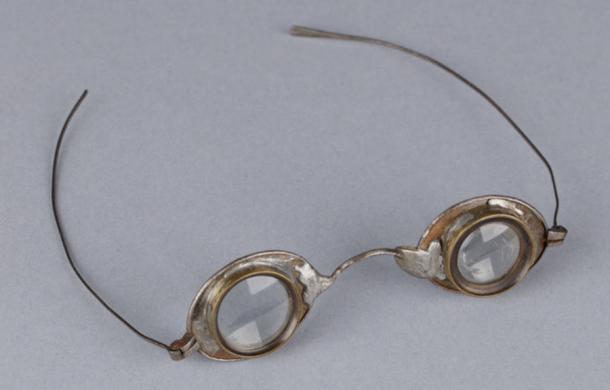 It is believed that around this time, glasswork had advanced to differentiate between concave and convex lenses. This led to improvements in glasses for near-sighted people to be able to see at a distance. In 1784, Benjamin Franklin redesigned glasses to take into consideration people who could not see at a distance nor close enough to read easily. This redesign was the birth of bifocals. These lenses were concave on top for near-sightedness and convex on the bottom for presbyopia. In 1825, Sir George Airy created cylindrical lenses to correct astigmatism.

Other developments were made as the Industrial Revolution rolled in in the 19th century. “Scissor Spectacles” were designed to fold up like scissors and be carried in your pocket if you didn’t want to wear them all the time. Though glasses were previously handcrafted and too expensive for anyone but the elite, industrialism brought about mass production of eyeglass frames and lenses, which made glasses available to average working men and women. 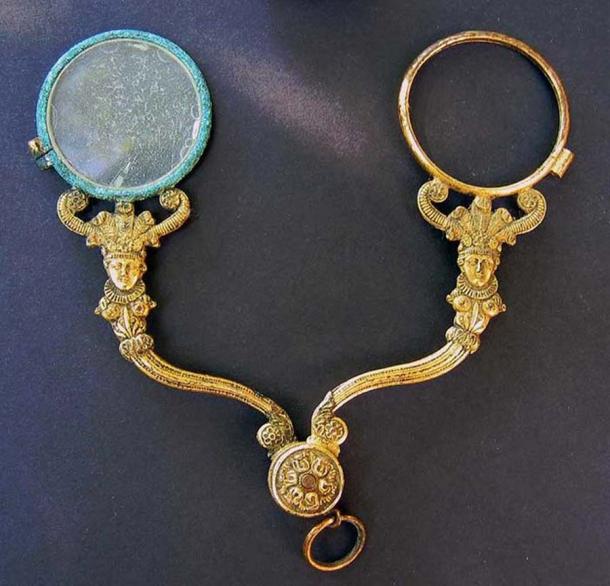 With mass production becoming the norm, society was able to start looking at other factors such as making glasses fashionable. New frame and lens shapes were produced as well as different frame colors. Using plastic to produce frames opened up more opportunities for various color and shape combinations. Nose-perch glasses attempted to make a comeback in the form of pince-nez glasses, which used a clip to pinch to the bridge of the nose. These glasses were famously worn by President Theodore Roosevelt, but lost popularity with future generations. 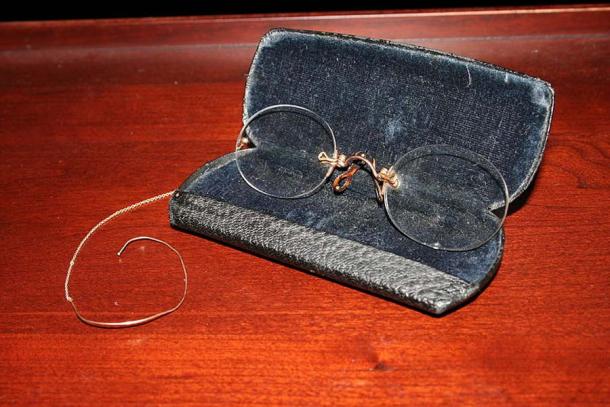 SCIENCE & TECH: Elon Musk Says Some Twitter Users Will Have To Pay To Use Platform

To compete with other styles, some glasses manufacturers began producing glasses with different lens colors. This led into the development of sunglasses, which were originally invented in China in the 12th century. Original sunglasses were not designed to protect the eyes from the sun, but rather to hide the emotions of Chinese officials using lenses made of quartz. These ideas collided in the early 1900s to produce tinted lenses that were able to protect the eyes of individuals with medical conditions such as light sensitivity. Years later, they were more than a medical intervention and preventative form of eye protection – sunglasses became a fashion statement.

In the 1980s, glass lenses were replaced by plastic lenses due to their ability to make glasses more lightweight. They were also less breakable and could be made thinner, so they were more comfortable to wear. Nowadays, eyeglasses are advancing with protective coatings added to the lenses to protect against UV light, computer screens, and glare. In the future, we will likely see more advancements in eye protection and vision correction, such as improved contact lenses and eye surgeries such as LASIK. However our vision continues being fixed, the coming years are sure to be crystal clear.

History of eyeglasses and sunglasses . Eyeglasses History – Origins of Glasses and Sunglasses. (n.d.). Retrieved May 6, 2022, from http://www.glasseshistory.com/

The history of eyeglasses . Atlantic Eye Institute. (2021, October 28). Retrieved May 6, 2022, from https://atlanticeyeinstitute.com/the-history-of-eyeglasses/

(Visited 15 times, 1 visits today)
Join us on Telegram
KNOWLEDGE is POWER / REAL NEWS is KEY
Woke & Liberal News is Fake News
You will find it on:
CNN - CBS - MSNBC - ABC - The New York Times - The Washington Post - Facebook - Twitter and more
They ALL SUCKS and simply DO NOT tell you the truth PERIOD