Jericho (also called Tell es-Sultan ) is a city with an incredibly rich history located in the Palestinian West Bank, near the Jordan River, some 55 kilometers (34 mi) from Jerusalem. Besides being dubbed the oldest city in the world, and its inclusion in the Bible, it was also home to some very bizarre mortuary practices.

Putting the Plastered Skulls of Jericho in Context

Archaeologists have unearthed the remains of more than twenty successive settlements in Jericho, the first of which dates back to around 10,000 BC, making it one of the oldest inhabited cities on the planet. Located within the Fertile Crescent, Jericho was a popular camping ground for Natufian hunter-gatherer groups. However, during the Younger Dryas period of cold and drought, permanent habitation of any one location was not possible.

By around 9,600 BC, the droughts and cold had come to an end, making it possible for Natufian groups to extend the duration of their stay, eventually leading to the first year round habitation and permanent settlement. A new culture based on agriculture and sedentary dwelling then emerged, characterized by small circular houses built of clay and stray bricks, cultivation of cereals, and burials of the dead within the floors of buildings.

The Plastered Skulls of Jericho: Portraits of the Deceased?

The Neolithic period is important because it is when we first find good evidence for religious and cultural practices, particularly those relating to burial customs. In Jericho, as well as placing the deceased under the floors of homes, the people also engaged in another unique mortuary practice .

In some cases, Strange Remains explains that the skulls of their dead were removed and covered with plaster in order to create very life-like faces, or death masks, complete with shells inset for eyes and paint to imitate hair and moustaches. The flesh and jawbones were removed from the skulls in order to model the plaster over the bone and the physical traits of the faces seem specific to individuals, suggesting that these decorated skulls were portraits of the deceased .

The subtle modelling used to create the life-like flesh is impressive in itself, keep in mind that this was achieved by combining plaster and iron oxide to give a skin-like color, but even more so given the very early date of these artifacts. They included details such as eyebrows or chins molded in plaster, shells were used for eyes, and it is believed that hairstyles and facial hair were then painted onto the plastered skulls. Evidence suggests that the skulls were then displayed or stored with other plaster skulls. 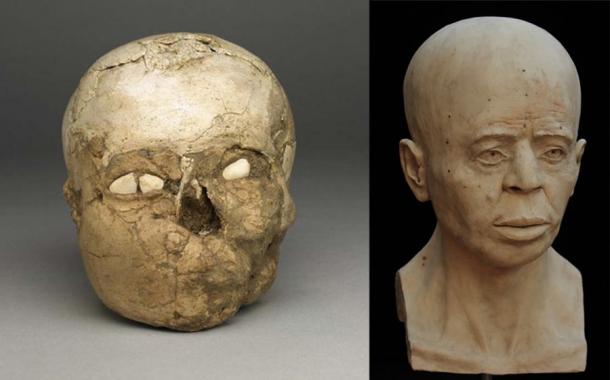 Plastered Skulls in the Levant

More than sixty plaster skulls have been found at six sites around the area of the Levant, usually dated to around 7,000 to 6,000 BC, but some go back as far as 8,000 BC. One such skull was excavated in the 1930s by John Garstang at Jericho, along with five other plastered skulls, and is currently in the Royal Ontario Museum.

Similar skulls were discovered by Kathleen Kenyon in the 1950s. These include what is arguably the most famous plastered human skull found to date. At about 9,500-years-old, this is the Jericho Skull , know as the “ oldest portrait in the British Museum ,” one of seven Neolithic plastered skulls Kenyon discovered during her Jericho excavations. In 2016 facial reconstruction experts from the Imaging and Analysis Center at the Natural History Museum recreated his face by creating a digital 3D model which was put on display at the British Museum . 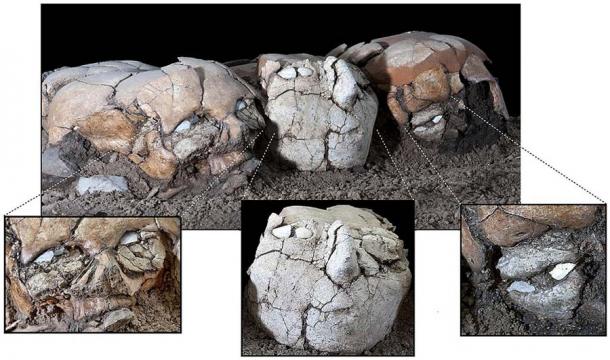 Plastered skulls from the Pre-Pottery Neolithic B site of Yiftahel in Israel. (Viviane Slon at. al. / CC BY 2.5 )

The Meaning of These Plaster Death Masks

Other sites where plastered skulls were excavated include Ain Ghazal and Amman, Jordan, and Tell Ramad, Syria. Most of the plastered skulls were from adult males, but some belonged to women and children. The traditional interpretation for the mortuary practice is that the skulls offered a means of preserving and worshiping ancestors. Some experts maintain that there is a religious aspect to the practice reflecting a belief that life continues after death through the preservation of the individual characteristics of the deceased.

However, it is possible that the skulls are not so much religious objects but rather powerful images made to remember and commemorate loved ones. Another theory is the skulls were used as substitutes for the deceased to help ward off the return of the dead. Although we may never know their true purpose, the Jericho skulls provide evidence of the earliest arts, and possibly religious practices, ever to be found in the region.