Archeologists exploring a mountainside in China have discovered 21 tombs dating back 2,000 years. The presence of luxury artifacts and a rare “couple’s grave” suggests this was an ancient royal burial site.

The discovery of the 2,000-year-old royal tombs was made at the Changsha archaeological site, which is located just over 665 miles (1,000 kilometers) southwest of Shanghai. Located in the present-day Hunan district, the ancient Changsha Kingdom was founded in 203 or 202 BC and represented the largest and longest-lasting kingdom of the Han Empire of China.

The discovery of the 21 tombs was announced earlier this week by a team of archaeologists from the Institute of Archaeology , at the Chinese Academy of Social Sciences and Hunan Provincial Institute of Cultural Relics and Archaeology. Located along a remote mountainside, the researchers said the tombs have laid buried for two millennia and that they “potentially held regal past, but not anymore”.

The imperial Han dynasty of ancient China was established by Liu Bang around 200 BC and was subsequently ruled by the House of Liu. This dynasty was preceded by the short-lived Qin dynasty , and succeeded by the Three Kingdoms period from 220 to 280 AD, which represented the tripartite division of China among the dynastic states of Cao Wei , Shu Han, and Eastern Wu.

On Tuesday this week, via China’s state-affiliated news outlet, Xinhua, the Institute of Archaeology at the Chinese Academy of Social Sciences announced that a team of archaeologists have excavated “21 vertical pit tombs containing over 200 artifacts.” One particular tomb was filled with pottery grave goods that dated back 2,000 years to the Western Han Dynasty, which the team of researchers said flourished during the earlier half of the Han dynasty, from about 200 BC to 25 AD.

Photo of the ancient Han tomb after the fill was removed. The Chinese burial tomb contained numerous luxury artifacts. ( Institute of Archaeology at the Chinese Academy of Social Sciences via Xinhua )

The archaeologists said they grouped the 21 tombs into two types: “tombs with passageways and tombs without.” Many of the tombs were found side-by-side; at one end of the site, three tombs were found in a row, while at the other end four further tombs were lined up together. One of the 21 tombs unearthed in Changsha held the remains of five decaying pillars and outer coffins shaped like “Ⅱ” or like double ‘I’s, according to the press release.

The researchers said this type of double layered tomb “is rarely found in the Hunan province.” In this tomb, excavators recovered “two iron relics, walls covered in glaze and a mineral known as talc and a tan-colored talc disk (or bi) with a rhombus and circle pattern.” Furthermore, it is thought that the rare “pair of tombs” may have accommodated the joint burials of a husband and wife. 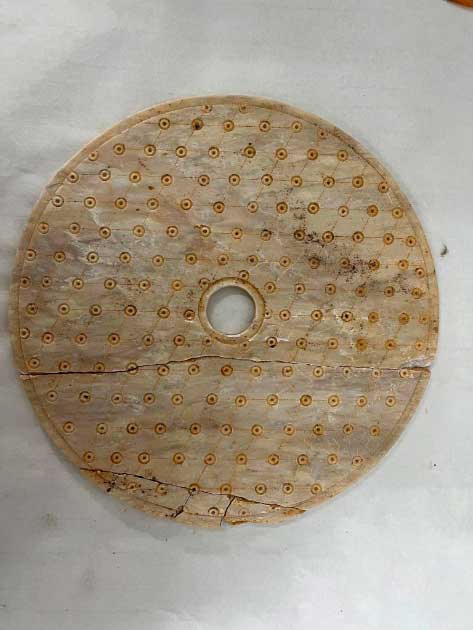 The picture shows the unearthed talc bi, decorated with lozenge pattern + dotted pattern, recovered from the ancient Han dynasty tomb ( Institute of Archaeology at the Chinese Academy of Social Sciences via Xinhua )

After studying the assemblage of 21 tombs, which are all of a similar age, the archaeologists concluded they likely belonged to “a royal family buried together in an ancient mausoleum”.

The Lunheng is a wide-ranging classical Chinese classic text written by Wang Chong around 27-100 AD, containing detailed essays about ancient Chinese mythology , natural science, philosophy, and literature. These texts describe Western Han imperial burial practices as having involved “sacrificial offerings” at ancestral temples, which accounts for the amount of pottery vessels and grave goods discovered among the 21 tombs.

Well-known examples of Western Han tombs have been excavated in the past, including Mawangdui and the tombs of Liu Sheng , prince of Zhongshan and his wife, Dou Wan. The tomb at Mawangdui was a nested tomb and the “paired tombs” of Liu Sheng and his wife, Dou Wan were cave tombs . It is known that “couple burials” emerged as the standard form of royal burial during the late Han period, along with the pairing of male/female motifs in the styling of the tombs. This is why the archaeologists point towards their discovery of a rare “paired tomb” as the smoking gun for this being the burial site of a Han “royal” family. 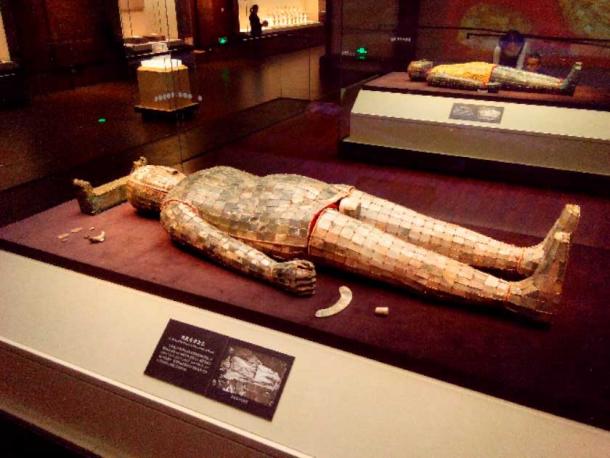