The remains of a decapitated 13th-century warrior were discovered in Greece in the 1990s. Now, his unique “gold-threaded jaw” is revealing Hippocratic ancient surgery secrets from 5th-century-BC Thracian Greece.

Professor Anagnostis Agelarakis from Adelphi University in New York discovered the Byzantine warrior’s jaw in 1991 at the Polystylon fort archaeological site in Western Thrace, Greece. In a 2017 paper published in the journal Byzantina Symmeikta the professor explained that in the early 1380s AD residents of Polystylon made a stand against the Ottoman Turks who were encroaching upon their ancestral family lands. It is believed that the “wounded” warrior was decapitated following the Ottoman’s capture of his fort.

Now, in a new study from Agelarakis published in the September issue of the journal Mediterranean Archaeology and Archaeometry , the professor shows how the man’s jaw was “threaded with gold to help it heal.”

This complicated and dangerous ancient surgery technique was developed in 5th-century-BC Greece and reveals the medical methods that were available to the valuable and no doubt valiant broken-jawed Greek warrior long before he was decapitated for fighting for his family, farm and freedom.

The ancient warrior’s head, which contained the evidence of Hippocratic surgery, was found in this child’s grave in Western, Greece in the 1990s. The archaeologist who found it published his first research paper on it in 2017 and then this month published another one detailing the surgery. ( Anagnostis Agelarakis / Mediterranean Archaeology and Archaeometry )

Bizarre Evidence of Ancient Surgery Found In A Child’s Grave

After decades of speculation the new study determined that the 13th-century people of the Thracian Polystylon fort “did not” submit peacefully to the invading Ottoman forces . The new analysis of the decapitated warrior confirms that a violent stand-off took place.

Agelarakis first detailed the burial in his 2017 paper in which he said the warrior “wasn’t given his own grave but was laid in the pre-existing grave of a 5-year-old child at the center of a 20-plot cemetery at Polystylon fort.” While it is thought of as being highly-probable, it is unknown at present if the warrior and the child were related.

In his new paper published in the journal Mediterranean Archaeology and Archaeometry Professor Agelarakis writes that after the warrior’s head was relieved from its torso “an unknown individual likely took the head and stealthily buried it.”

Given that the rest of the body was not recovered, the warrior’s head was “probably snatched without the permission of the subjugators.” Furthermore, because the cranial cap and the jaw were discovered together, it is believed that the man’s head “likely had soft tissues on it when it was buried in the mid-1380s,” said Agelarakis. 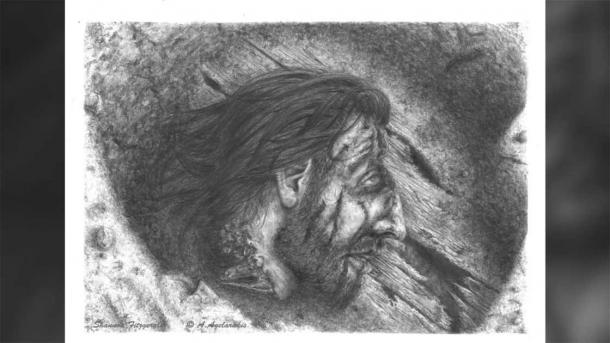 A representative drawing of the dead Greek warrior’s head when it was lopped off by the Ottomans. ( Anagnostis Agelarakis / Mediterranean Archaeology and Archaeometry )

A Sophisticated And Flabbergasting Medical Discovery

The new paper says the warrior died between the ages of 35 and 40 years old. Ten years previously, around 1373 AD, he experienced the “devastating jaw fracture, also described as a “horrendous frontal impact.”

The cause of the wound is unclear, but the author suggests several possibilities such as: “a forceful fall while horseback riding; a battle trauma from a thrust spearhead or another sharp, hand-held weapon; or a ballistic projectile fueled by black powder.”

Professor Agelarakis described the discovery of the nearly 650-year-old warrior’s healed jaw as a “perfect example of the accuracy of an ancient medical professional.”

It was discovered that the warrior’s lower-teeth had a line of dental calculus (hardened plaque) that accumulated around a thin wire that was threaded around the base of the man’s teeth to help the jaw heal.

Think about it. Six hundred and fifty years ago somebody successfully put the two major fragments of a smashed jaw back together. “It’s very sophisticated – it’s flabbergasting,” the professor told Live Science .

SCIENCE & TECH: The Twin Tragedy of Tutankhamun: Death of a Dynasty 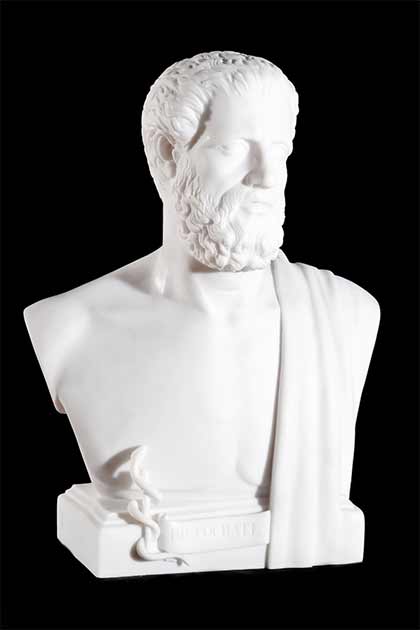 A classical white marble bust of Hippocrates isolated on black. More than one thousand years before the important Greek warrior with the wired jaw died, Hippocrates had already written that gold thread was perfect for joining facial bones. ( Mrakor / Adobe Stock)

Analysis of the tooth calculus showed no evidence of a silver, copper or bronze wire having been used, which leaves only gold thread . This is precisely what Hippocrates prescribed in the 5th century BC for assisting the healing of broken facial bones. In conclusion, receiving state of the art medical assistance, having his food and drink prepared for him, the latest research study says this man must have been “a very important person.”

Professor Agelarakis goes so far as to say the man might have been “the military leader of the fort.” When those dark days descended on the fort in the 13th century, when the Ottoman forces darkened the horizon, the warrior fought to save his family and fort.

Then, when the Ottomans finally subjugated the fort the master of the family was beheaded and someone close to him grabbed his head and later buried it at the center of the fort with the unidentified 5-year-old child.

Top image: The left side of this Greek warrior’s jaw was broken in two but the use of a Hippocratic ancient surgery, which is visible in the image shown here, managed allow the jaw to heal again.                 Source: Anagnostis Agelarakis / Mediterranean Archaeology and Archaeometry

(Visited 10 times, 1 visits today)
Join @usnewscom on Telegram
KNOWLEDGE is POWER / REAL NEWS is KEY
Woke & Liberal News is Fake News
You will find it on:
CNN - CBS - MSNBC - ABC - The New York Times - The Washington Post - Facebook - Twitter and more
They ALL SUCKS and simply DO NOT tell you the truth PERIOD