Home
Science & Tech
SCIENCE & TECH: A Spider Had a Leading Role in the Story of Scottish Independence

SCIENCE & TECH: A Spider Had a Leading Role in the Story of Scottish Independence

Inspiration can come in all shapes and sizes. But the story of the downtrodden Scottish national hero Robert the Bruce, who ruled Scotland in the 14th century, being motivated to continue his struggle for Scottish independence by a lowly spider really takes the biscuit.

The 1300s were a tough time for the Scots. The famed William Wallace , a leader in the fight for Scottish independence, was captured in August 1305, before being hung, drawn and quartered on the orders of King Edward I of England , who was attempting to establish English rule over Scotland. In 1306 it seemed that the fate of Robert the Bruce was heading in the same direction.

It had been a difficult year. After stabbing his rival to the Scottish throne, John Comyn, at Greyfriars church in Dumfries, Robert the Bruce was first excommunicated by the Pope, and then crowned king of Scotland in March 1306, incurring the wrath of the English king. He then suffered a devastating defeat at the Battle of Methven in June, an event which forced him into exile. Meanwhile, much of his family was either executed or imprisoned. 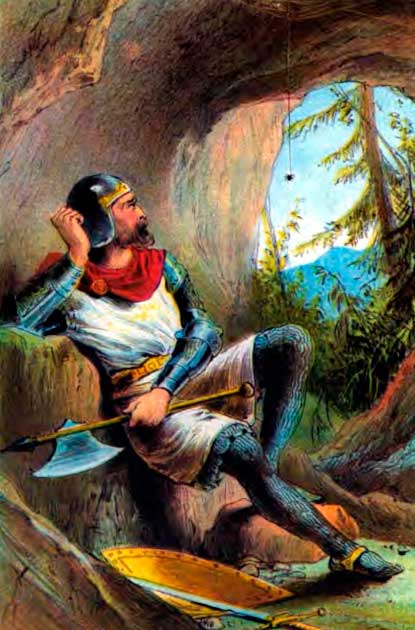 Illustration depicting Robert the Bruce and the spider in a remote Scottish cave. ( Public domain )

It is during his time in hiding that the purported spider incident is said to have occurred. While lying low in a secluded cave considering his future, local legends claim that Robert the Bruce became fixated on a spider stubbornly weaving its web between one side of the cave and another. After every failed attempt, the spider would recover its composure and continue until it had attained its objective.

Drawing parallels with his own failures and struggles for Scottish independence , it is believed that this simple experience inspired Bruce to continue the fight. He ended up beating the English at the 1314 Battle of Bannockburn , a landmark event during which the outnumbered forces of Robert the Bruce won out against the English. It was nevertheless only in 1328 that the English accepted Bruce and his heirs as rightful successors and recognized the independence of Scotland. 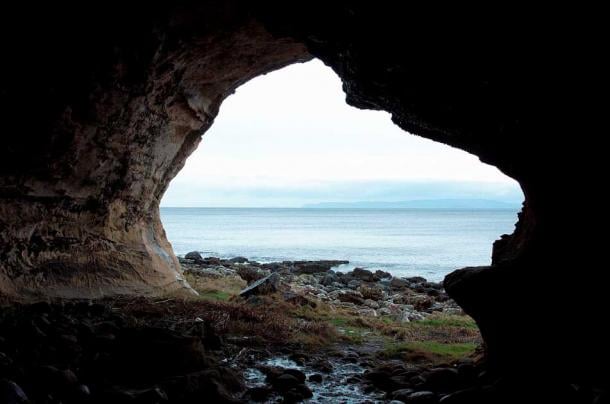 King’s Cave on the Isle of Arran off the west coast of Scotland. (marsupium photography / CC BY-SA 2.0 )

These days the story of Robert the Bruce and the spider has attained mythical status. In fact, several locations have attempted to cash in on the attention, from Rathlin Island off Northern Ireland, the King’s Cave on the Isle of Arran off the west coast of Scotland or even Bruce’s Cave in Dumfriesshire. Historians however doubt the veracity of the spider story.

“It’s time somebody swatted that spider once and for all!,” urged historian Dr. Louise Yeoman when speaking to the BBC. It seems that the story was first recorded a few hundred years later in the 17th century, claiming that it was actually Sir James Douglas, one of Bruce’s few surviving supporters after Methven, who tried to bolster Robert the Bruce with the story of the persistent spider.

Top image: Legend has it that Robert the Bruce was inspired to continue his struggle for Scottish independence by a spider in a cave. Source: pedro / Adobe Stock