Archaeologists have been excavating at the Nanzuo heritage site in Qingyang, on China’s Loess Plateau, in Gansu province. Dating back 4,600 to 5,200 years, according to China Daily , the Nanzuo site was found in an area that represents one of ‘the largest known human settlement complexes of its time,’ covering 600 hectares.

Last Wednesday, Han Jianye, a professor at Renmin University of China who is leading the excavation, attended an online conference held by the National Cultural Heritage Administration . The archaeologist told Chinese authorities that the site offers key physical evidence ‘for the pivotal role of the middle reaches of the Yellow River in the birth of Chinese civilization’.

Excavating the Origins of Chinese Civilization

The Nanzuo site was first identified in 1958, and previous excavations were undertaken at the site in the 1980s and 1990s. Organic materials radiocarbon dated to between 4,600 to 5,200 years old. The site was built in the late period of the Yangshao Culture , that dates back 5,000 to 7,000 years across North China. However, Professor Han said the focus of the recent digs concentrated on an area of roughly 30 hectares (74.13 acres), surrounded by three layers of vast defensive moats.

An 880 sq. meter (9472.24 sq. ft.) terrace was excavated at the site earlier this year. The discovery of nine rammed earth foundations, with a 630 sq. meter (6781.26 sq. ft.) square center, suggested that the site was perhaps a royal palace with an elaborate defensive system. The palatial constructions and defensive system are described as being of ‘extraordinary size.’ If indeed this is what the structures were, then the discovery represents ‘a strong public power, indicating this region had entered an era of civilization,’ said Han. 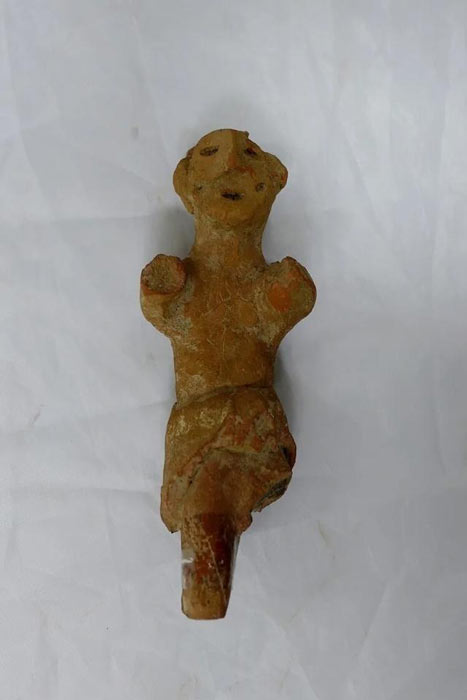 A humanoid sculpture discovered at the Nanzuo site in 1984. ( Qingyang Municipal Bureau of Culture, Sports, Radio, Film and Tourism )

Artifacts From the Dawn of Civilization

Among the thousands of artifacts collected at the site the archaeologists discovered a huge amount of painted pottery, including a 74-cm-tall (29.13 inch) decorated clay jar. Samples of burnt rice informed the researchers about the development of agriculture in the region. And a collection of red-dyed stone and bone arrows stand testimony to the ritualistic traditions of the later Zhou Dynasty (c.11th century-256 BC). Han said red arrows were given by Zhou kings to rulers of vassal states. 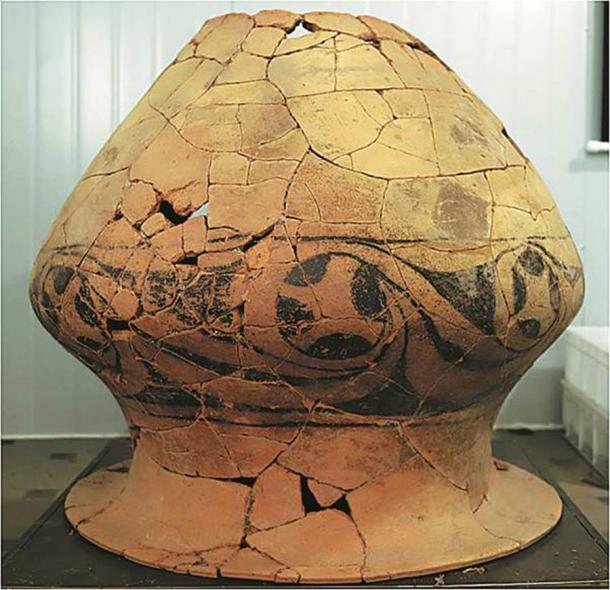 A painted clay jar unearthed at the Nanzuo site this year. ( CHINA DAILY )

Zhang Chi, an archaeology professor at Peking University, said that the newly excavated buildings, together with those still unknown, could represent an architectural compound ‘whose scale is beyond our imagination.’ And if more 4,600 to 5,200-year-old ruins are unearthed, Chi thinks the site deserves to be declared a World Heritage Site.

Li Xinwei is a researcher at the Chinese Academy of Social Sciences’ Institute of Archaeology. China Daily reported Xinwei saying that while the cultural center of Yangshao was in today’s Central Chinese provinces, archaeological findings determine the eastern part of today’s Gansu province was probably one of its origins. Nanzuo indicates that in the late period of Yangshao Culture, its people returned to their homeland.

In conclusion the site represents ‘a type of civilization’ which influenced the appearance of large-scale cities in the later period across Northwest China, like Shimao. Dated to 2000 BC Shimao is a 400 ha (988.42 acre) Neolithic site in Shenmu County, Shaanxi, China, and the largest known walled site of that period in China. Together with Shimao, Nanzuo is forcing historians to rethink the beginnings of Chinese civilization, but the missing links between them remain elusive, Li said.

(Visited 12 times, 1 visits today)
Join @usnews on Telegram
KNOWLEDGE is POWER / REAL NEWS is KEY
Woke & Liberal News is Fake News
You will find it on:
CNN - CBS - MSNBC - ABC - The New York Times - The Washington Post - Facebook - Twitter and more
They ALL SUCKS and simply DO NOT tell you the truth PERIOD