An exciting discovery has been made in Egypt’s Saqqara region, where a team of archaeologists have uncovered a 16-meter-long (52.5 ft) ancient papyrus – a true historical treasure that hasn’t been seen in over a century!

Part of the Saqqara necropolis near Cairo, as seen from the air. The papyrus was discovered within one of 250 caskets discovered at the Saqqara site. ( Vladyslav Siaber / Adobe Stock)

At first, scientists believed the ancient scroll to be only 9 meters long (29.5 ft), but after a thorough restoration and translation process in the restoration laboratory of the Egyptian Museum in Tahrir, it was revealed to measure an astounding 16 meters (52.5 ft), reports the Egypt Independent .

The papyrus has been named the “Waziri Papyrus” after Mostafa Waziri, Secretary General of the Supreme Council of Antiquities, who made the exciting announcement. It contains texts from the Pharaonic Book of the Dead and was found inside one of 250 caskets at the Saqqara site, noted Arkeonews. This text, dating back to 50 BC, could provide new and revealing insights into ancient Egyptian beliefs about the afterlife. 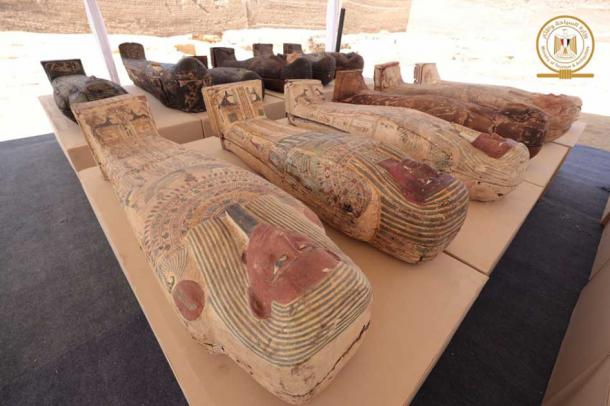 Some of the 250 mummy sarcophagi unearthed in Saqqara south of Cairo. The ancient papyrus was discovered within one of the caskets. ( Ministry of Tourism and Antiquities )

Ancient Papyrus Contains Texts from Book of the Dead

The Pharaonic Book of the Dead is an ancient Egyptian funerary text which was written on papyrus scrolls and buried with the deceased in their tomb. The texts contain declarations, hymns, and spells that were intended to help the deceased navigate the treacherous journey to the afterlife. It also includes illustrations and vignettes that depict the journey of the soul through the underworld and the different gods and goddesses the deceased would encounter along the way.

The Book of the Dead is an important source of information on ancient Egyptian beliefs and practices related to death and the afterlife. It is considered a unique and important document of ancient Egyptian culture and religion and continues to be studied by scholars and Egyptologists around the world. 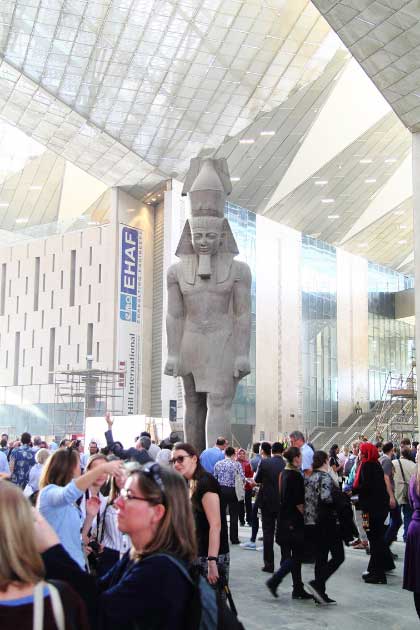 The ancient papyrus will be presented at the grand opening of the much-anticipated Grand Egyptian Museum in Giza, seen here under construction. (Djehouty / CC BY-SA 4.0 )

Papyrus Will Be Displayed at Opening of Grand Egyptian Museum

The date Egyptian Ministry of Tourism and Antiquities chose to make the the announcement of this incredible find was January 14th. This was in recognition of the annual Egyptian Archaeologists Day, due to the fact that this latest discovery is a testament to the hard work and dedication of the country’s archaeologists.

The papyrus will be presented at the grand opening of the Grand Egyptian Museum . Located in Giza, the new museum is intended to be the largest archaeological museum in the world and will house over 100,000 artifacts from ancient Egypt, including many from the tomb of Tutankhamun. The museum is expected to attract millions of visitors each year and will be a major tourist attraction in Egypt, providing a deeper understanding of the country’s rich history and culture.

The newly-discovered papyrus containing the Book of the Dead spells will provide a deeper understanding of one of the world’s most fascinating ancient cultures. The papyrus will be one of thousands of exciting artifacts that visitors will be able to view when the Grand Egyptian Museum opens later this year.

Top image: Example of one of the many fine vignettes (illustrations) from the Book of the Dead of Hunefer. Source: Public domain

(Visited 30 times, 1 visits today)
Join us on Telegram
KNOWLEDGE is POWER / REAL NEWS is KEY
Woke & Liberal News is Fake News
You will find it on:
CNN - CBS - MSNBC - ABC - The New York Times - The Washington Post - Facebook - Twitter and more
They ALL SUCKS and simply DO NOT tell you the truth PERIOD