Humans have created monumental constructions on cliff faces throughout the world. These striking architectural wonders have often times been inspired by the desire to come closer to the heavens or to defend communities from adversaries and watch over the surrounding landscape. Entire villages, mammoth statues, tombs and places of worship are just some of the formidable cliff constructions from ancient history which deserve your attention.

Inhabited between 1190 and 1300, the Cliff Palace of Mesa Verde contains about 220 rooms and 23 subterranean prayer-chambers. There was even a four-storey Sun Temple from which they would observe the heavens. Located in southwestern Colorado in the United States it is the largest cliff dwelling in the American Southwest and was once home to the Ancestral Puebloans. ( romanslavik.com / Adobe Stock) 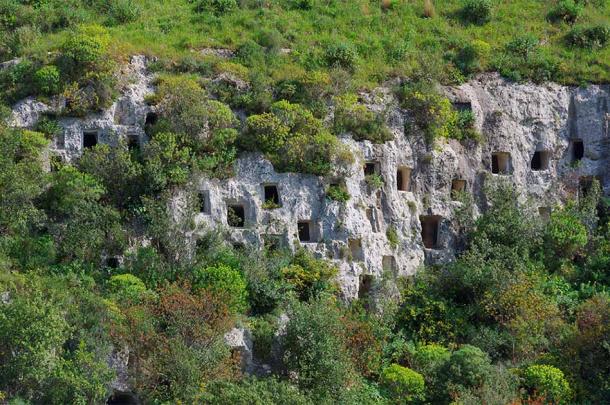 Within the Hyblaean Mountains of Sicily lies a prehistoric cemetery known as the Necropolis of Pantalica . The largest stone necropolis in Europe, it was used during the late Bronze Age between the 13th and 7th century BC and is a collection of 5,000 of tombs or burial chambers cut into the walls of a canyon resembling a beehive. ( Samuele Gallini / Adobe Stock) 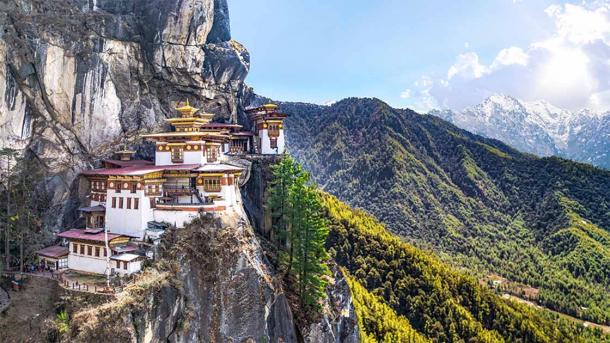 The isolated Paro Taktsang Monastery in Bhutan is set within the Himalayan mountains and is one of the most revered Buddhist pilgrimage sites. Built in the late 17th century by Gyalse Tenzin Rabgye, legend has it that it was anchored to the cliff by the hairs of female celestial beings known as khandroma. Taktsang means “tiger’s lair.” ( ultramansk / Adobe Stock) 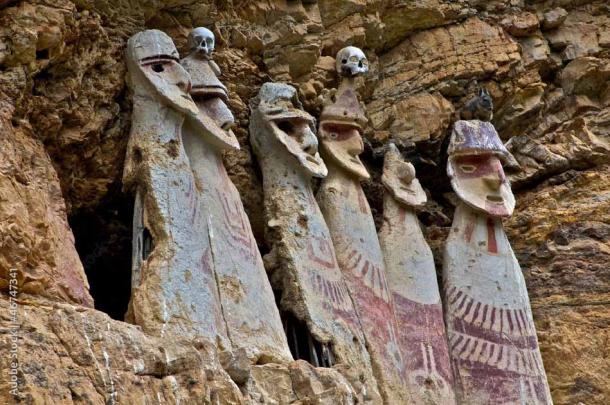 In the remote cloud forests of northern Peru, a collection of sarcophagi decorated with humanoid faces look out over the Utcubamba valley from the limestone cliff face. The sarcophagi of Carajía are remnants of the lost pre-Inca Chachapoya people, known as the Warriors of the Clouds. Their sarcophagi measure up to 2.5 meters (8.2 ft) and were made of clay, sticks and grasses. They have been radiocarbon dated back to the 15th century. ( newfotografer / Adobe Stock) 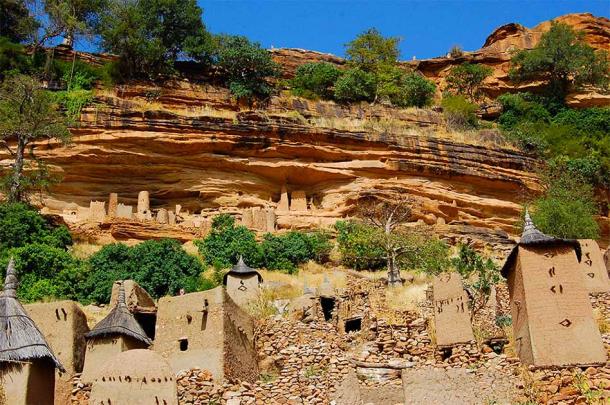 Situated in a remote corner of Mali, the Cliff of Bandiagara is a sandstone cliff which reaches up 500 meters (1,640 ft) and continues for over 150 km (93 mi). Said to have been occupied for at least 2,000 years, the cliff shelter has been used as the site of villages, mud-built granaries, altars, rock art and ritual customs of the Dogon people , and the Tellem and Toloy people before them, along with their unique architecture. ( AWU / Adobe Stock) 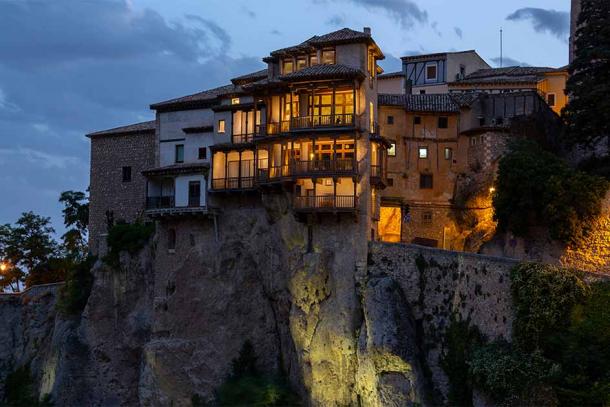 The gravity-defying hanging houses of Cuenca in Spain have been around since at least the 15th century. Overlooking the River Huécar, they are built hanging off the side of the gorge and only a few remain today. Curiously, the Ecuadorian city of Cuenca was named by a Spanish military commander in 1557 because the barranco overlooking the River Tomebamba, where there are hanging houses today, reminded him of his home town in Cuenca, Spain. ( mrallen / Adobe Stock)

The Leshan Giant Buddha , also known as Dafo, near the city of Chengdu in China was carved into the side of Mt. Lingyun between 713 and 803 AD overlooking the junction of three river and facing the scared Mount Emei. A popular Buddhist pilgrimage site, visitors flock to see the Buddha to pay their respects and pray for good fortune. The colossal statue is the largest stone Buddha in the world and by far the tallest pre-modern statue to have survived into modern times. ( rpbmedia / Adobe Stock) 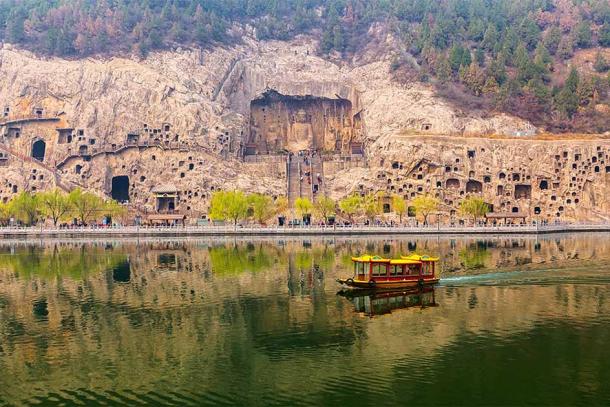 The Longmen Grottoes , or Dragon’s Gate Grottoes, in Luoyang, China, are made up of over 2,300 caves and niches carved into steep limestone cliffs running along 1 km of the Yi River. Created over centuries, work on the grottoes began in 493 AD. Incredibly, these caves and niches contain some of the most spectacular examples of Buddhist art, including almost 110,000 Buddhist stone statues, over 60 stupas and 2,800 inscriptions carved on steles. ( SANCHAI / Adobe Stock) 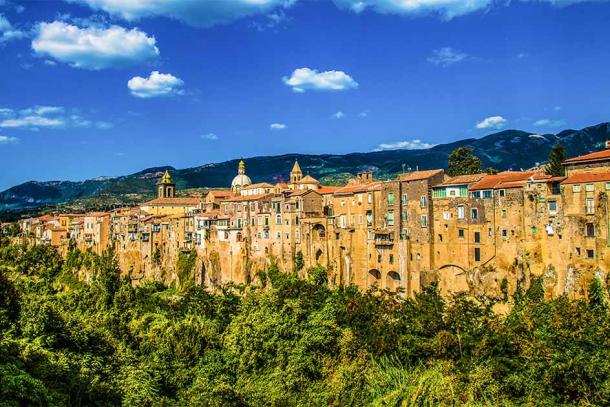 At Santi’Agata de’ Goti in Italy, the phrase “living on the edge” takes on an entirely different meaning. Here the buildings at the edge of this medieval town are built into the rugged cliff face above the river gorge and together they have created an effective fortification wall. ( Martina / Adobe Stock) 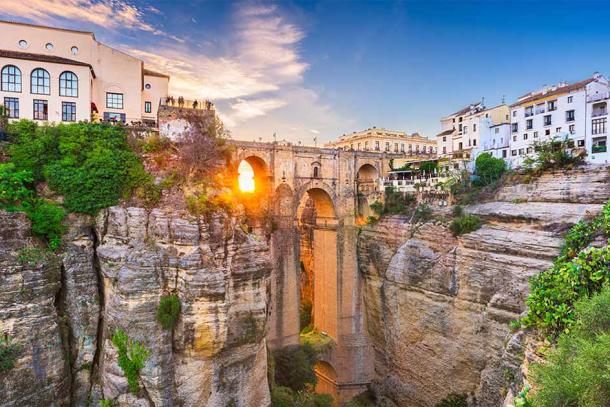 The Puente Nuevo, or New Bridge, in Ronda, Spain, crosses a the deep El Tajo canyon over the Guadalevín River which runs 98 meters (322 feet) below. When it was completed in 1793 it was the highest bridge in the world (until 1839). The first attempt collapsed in 1741 killing 50 people. The room above the central arch has been used as a prison and torture chamber, and during the Spanish Civil War prisoners were thrown from its window. ( SeanPavonePhoto / Adobe Stock) 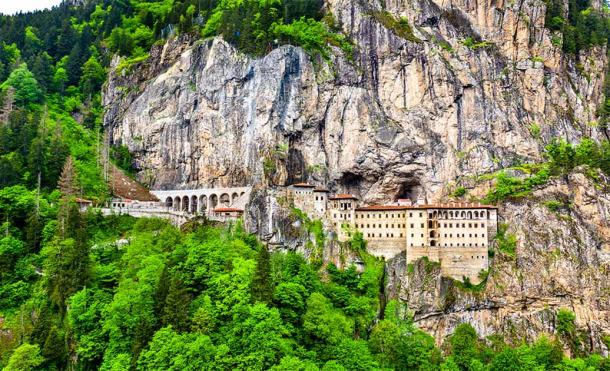 The Sumela Monastery in Turkey is one of the oldest and most historic monasteries in the Christian world. While there are no written records, estimates date its origins to about 1,000 years ago. Located high up on the steep cliffs overlooking the forests of Trabzon, it can only be reached by climbing up a narrow stairway. Legend has it that two monks from Athens saw an image of the virgin in a cave (now the Rock Church) and built the monastery on that spot in 386 AD. ( Leonid Andronov / Adobe Stock)

SCIENCE & TECH: Bridgestone is reinventing the tire for the moon 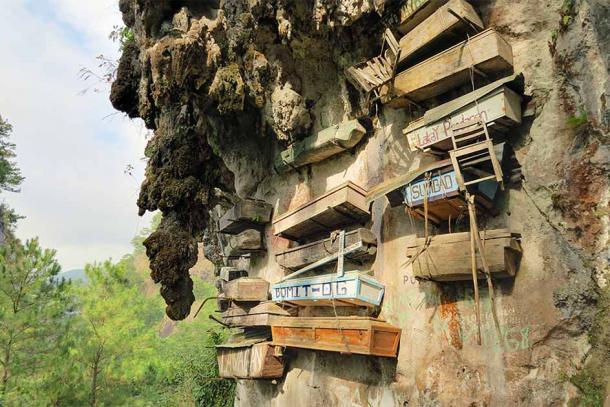 The indigenous Igorot people on Luzon Island in the Philippines practice unique funerary customs in which their dead are placed within coffins attached to the side of cliffs. Known as the hanging coffins of Sagada in the Philippines, the Igorot claim this has been taking place for over 2,000 years. ( flocu / Adobe Stock) 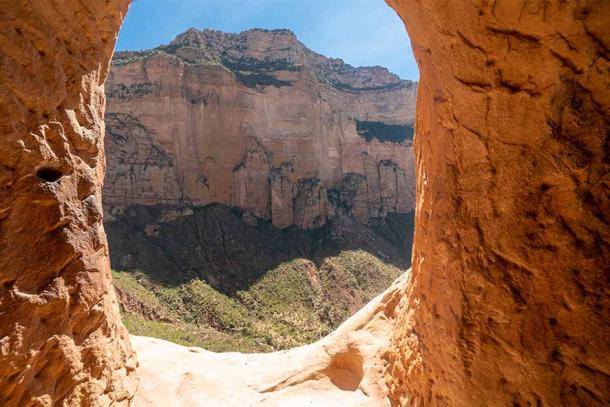 Abuna Yemata Guh is a rock-hewn Christian church in Ethiopia carved into the sandstone rock 2,580 m (8,460 ft) above sea level and said to date back to the 5th century. Probably the most inaccessible place of worship on Earth, getting there is perilous and reaching the church can only be done on foot. Dedicated to one of the Nine Saints, Abuna Yemata, its surprisingly well-preserved frescos depict figures from the Bible. ( Felix Friebe / Adobe Stock) 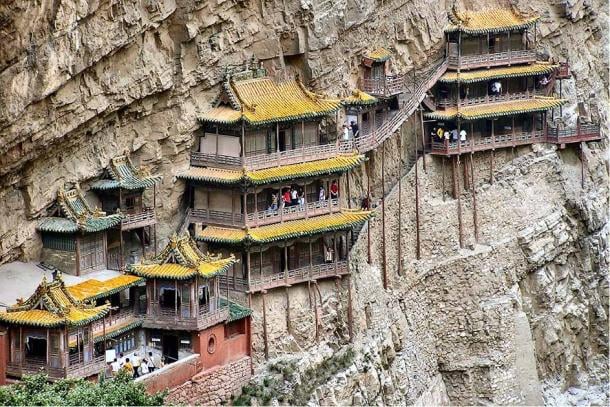 Hengshan, or Mount Heng, which is located in Shanxi province, is one of China’s Five Great Mountains. Pinned to the side of its cliff face is the Xuan Kong Si, also known as the Hanging Monastery of Mount Heng . Despite its precarious position, the monastery has been hanging in its original position for more than 1,500 years, since 491 AD, a testament to the ingenuity of its builders. ( Public domain ) 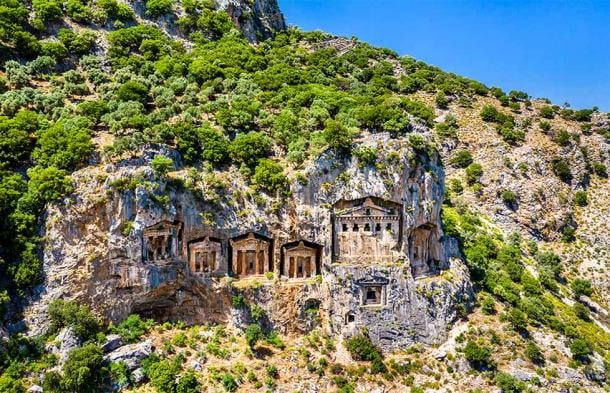 There are hundreds of spectacular Lycian rock-cut tombs in southwest Turkey, including these tombs overlooking the Dalyan River known as the Tombs of the Kings at Kaunos. The earliest examples were carved in the 5th century BC. The Lycians believed that a mythical winged creature would carry the souls of the dead to the afterlife which explains their location. Carved into the cliffs, they were shaped like the facades of Lycian houses and often contained several members of a particular family. ( Leonid Andronov / Adobe Stock)

Top image: Pinned to the side of its cliff face is the Xuan Kong Si, also known as the Hanging Monastery of Mount Heng . ( Public domain )

(Visited 20 times, 1 visits today)
Join us on Telegram
KNOWLEDGE is POWER / REAL NEWS is KEY
Woke & Liberal News is Fake News
You will find it on:
CNN - CBS - MSNBC - ABC - The New York Times - The Washington Post - Facebook - Twitter and more
They ALL SUCKS and simply DO NOT tell you the truth PERIOD